What is Minecraft and Why it is becoming popular ? Minecraft has made its place as one of the few games that have continued to grow in users over the 10 years since its original release. Minecraft popularity among the gaming community has skyrocketed. Minecraft is a 3D video game publicly launched in 2009. Minecraft was founded by Mojang, a Swedish video game development studio. Later in September 2014 Mojang company is purchased by Microsoft for US $2.5 billion. So, we can say Microsoft owns Minecraft right now.

Minecraft has actively searched keywords in Google Search and if we look at data over the past 5 years, its popularity is again increasing from mid-2018.

Minecraft is a milestone in the development of gaming history, creating a genre that is both entertaining and has millions of happy, lucky players and followers.

You can clearly see a number of Minecraft over a million reports from Statista, it seems to grow rapidly. 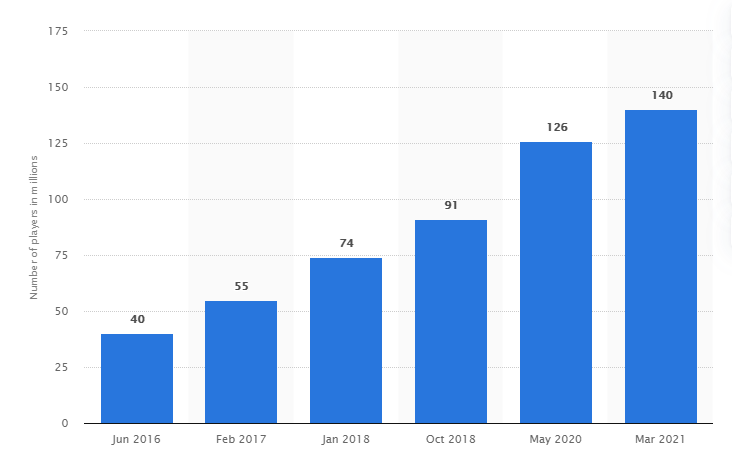 Also, from Wikipedia, we can see most selling games all the time we found Minecraft in the first place with over 200,000,000 soled.

Why Minecraft is Popular?

Because of the following reasons Minecraft is becoming popular day by day.

Minecraft is a versatile game and is for every type of player. Playing Minecraft is simple, but mastering it is extremely difficult.

As a beginner, you can construct your first small house, craft tables, stock up on torches, dig mountains, collect diamonds, and so on.

If you are a skilled player, you can build your own castle, cities, towns, farms, gardens, famous landmarks (such as the Statue of Liberty), and powerful weapons such as the Diamond Sword, CrossBow, Gunpowder, and so on. You can also use your imagination to make and recreate minigames.

Minecraft is one of the creative games which helps the players to be creative. While Playing Minecraft you have to face various challenges like finding valuable resources, gathering food, building a shelter to protect from enemies, techniques for using craft tools, etc. Managing all those things helps build problem-solving skills and social skills. Games like Minecraft helps in increasing processing and cognitive skills.

You need dedication for doing the creative task in Minecraft. So Minecraft also helps you to build dedication and focus.

There is the various mode in Minecraft like Adventure and survival mode are a little creative and as the name suggests Creative Mode is a creative one.

People enjoy playing these games because they are simple. They only need to create and explore their own world. They are not required to read lengthy instructions and storylines before beginning to play the game. Within an hour, you will have adapted to it through trial and error.

Minecraft is suitable for any age. From child to older can play these games because it does not have any bloodshed. If elder people see playing these games then they won't refuse to play.

This game's graphics are unique and straightforward. Everything is made of blocks, and the graphics are simple and one-of-a-kind. It lacks any distracting animations or effects, which makes it appealing to people of all ages.

Minecraft user has to test various new things, experience failure, and this repeats this process again and again and this is valuable. This teaches children that failure is a part of life and we must try out new things in a different manner to reach our goals. Minecraft helps to build a never losing hope mentality. It helps in increasing problem-solving skills. They have to use their imaginations and then figure out how to put their ideas into action.

It teaches players to be patient to reach targeted goals in Minecraft because they have to undergo various types of trial and error.

People can play Minecraft on a shared server, which allows them to work more effectively as part of a team. They share a sense of accomplishment, which improves communication and collaboration skills.

In survival mode, players must find and gather the appropriate resources as quickly as possible. Players will quickly learn how to manage resources and time this way.Children learn how to calculate the cost of various items as well as the time required for various tasks.

You can play Minecraft on most of the popular available devices by installing the appropriate edition of Minecraft on your devices.

You can play Minecraft on any device ranging from small Raspberry PI to game station devices.

If you want to play Java Edition then minimum requirement your system should have:

Also Read: Why do phones slow down and how to fix the slow phone?

For any updates, you can follow the below links:

I am a Minecraft player and like the updates and they update it frequently within 2-4 months.

The creative streak of the game makes it easy to customize your gameplay to your preferences. There aren't many games with this level of customization.