On the internet, you may find a wide variety of advertising programs. Some examples of these programs include Google Adsense, Bing Adsense, Chitika, Amazon Associates, Yllix Media, Infolinks, Adsterra, PopAds, RevContent, PropellerAds Media, and others. These all help to earn money from advertisement. Among all of them, Google Adsense is one of the most well-known advertising systems that can help a website in generating revenue.If you want to create personalized ads in minutes for free, try Adobe Express here.

CPC is the most effective and widely utilized option. Google Adsense is an internet advertising program that uses the CPC (Cost-Per-Click) bid type. This bid type is also known as PPC (Pay-Per-Click) or Impression (CPM) bid type. This bid type enables publishers (anyone who wants to put ads on their sites) to insert a small amount of JS code into their sites, and then ads that are targeted and relevant to the content of the site will appear. These cost-per-click advertisements can be displayed on part or all of the website's pages, and they are of great use to both advertisers and website owners. CPC adverts can be found on both Bing and Google ads.

Google provides support for a wide number of ad formats, any of which may be displayed on your pages. It's possible that Google will show you the following ad types that it supports.

When you log in to your Google Adsense account after your website has been reviewed and approved by Google Adsense, you will be presented with a large number of Google Adsense key metrics and terms, some of which may be confusing. My buddy, I am here today to talk to you about the essential metrics for Google Adsense. Let's start. 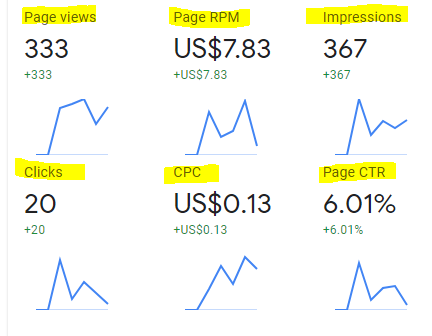 Clicks represents the total number of times advertisements were clicked. The more clicks you get, the more money you make.

Every time a user views/looks at a page that contains advertisements, that is counted as one page view. No matter how many advertisements are displayed on a certain page, just a single visit of that page is counted each time it is viewed.

For instance, if a page has four ad units and it is visited three times, then the page will be considered as having three views. Therefore, it is extremely vital for you to do weekly page view checks in order to monitor the effectiveness of your advertisements.

According to Google, an ad view is only counted if at least 50% of a particular ad is displayed for one second or longer.

A query is a request made to Google's system each time an ad unit is displayed. Google counts a query every time it is asked to display an ad unit, whether or not targeted ads are shown.

The CTR percentage indicates how many advertisements are clicked by viewers.It is calculated by dividing the number of ad clicks by the number of impressions, page views, or queries received.It determines how frequently visitors click on your advertisements.

For instance, if you received 10 clicks out of a total of 1000 queries, the click-through rate (CTR) for those queries would be.10%.

Ad CTR is calcuated by dividing the total number of ad clicks by total no. of page impressions.

CTR is the most important metrics in Adsense and considered  the major reason for disabling of your account.

How many CTR is considered as best ?

CTR should be no higher than 9–10%, but it must be lower than 4–5%, and if it is 1-2%, then it is excellent; however, it should not be higher than that. Please take into account that I am only considering about this for the blog site and not for YouTube.

The overall CTR is impacted when there are an excessive number of impressions but a low number of clicks.

The percentage of clicks that result in the customer making a purchase as a direct result of advertising. For instance, if one customer out of one hundred who visits your website actually makes a purchase, then your conversion rate is 1%.

CPC bidding is a mechanism for generating revenue from internet advertising in which the publisher, who is referred to as "you," is compensated for each click on an advertiser's ads.

The cost-per-click (CPC) is determined by taking the entire cost of all of your clicks and dividing that value by the total number of clicks.

Note: The higher the CPC, the more money you will make from each click on an advertisement.

CPM is an abbreviation for "cost per 1000 impressions." The Roman numeral for 1,000 is represented by the letter "M" in CPM. In the Google ad auction system, CPM ads compete with cost per click (CPC) ads, and the system will display whichever ad is expected to generate the most revenue for you.

The cost-per-thousand-impressions, or CPM, is determined by first determining the entire cost of the advertisement and then dividing that figure by the total number of impressions then multiplying the total by 1000

RPM is a reporting feature, and the amount that is displayed there does not represent the actual amount that was paid to a publisher. RPM is not an accurate representation of how much money you (the publisher) have made. The Rate Per Impression (RPM) is determined by dividing the Estimated Earnings by the number of Page Impressions, Page Views, or Queries. In consideration of this, RPM can be further subdivided into the following three categories: ad RPM, page RPM, and query RPM. RPM are measured in groups of 1,000 rather than individually.

Example 2: If a publisher earned an estimated $80 from 40000 ad impression, then

Every blogger has to reduce your overall site bounce rate to increase your website search performance. Website will receive higher bounce rate if the visitor visits your site on any page( probably called as an entrance page) and leaves without visiting other pages (or link) on the same domain.

For example, say 100 visitor comes to the landing page( home page ) of your sites within say a month, and 50 of those visitors exit or leave your site after viewing just a homepage, then bounce rate of the homepage would be (50/100) * 100% = 50 %. Each page on your site may have a different bounce rate.

The average position is a score that is calculated by Google based on your quality score and bid.

In this manner, I believe that ourtechroom can clear up any confusion you may have regarding Google's Bid Types, Ad Types, and Key Metrics.