SATA SSD vs NVMe SSD: Speed , Storage. Which is Better 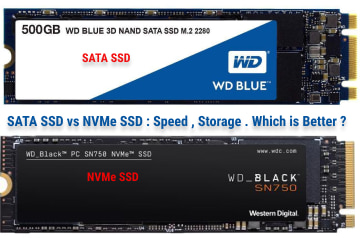 Not every SSD performance is the same and it depends on the task you perform. Here, we talk about the speed, storage of SATA SSD and NVMe SSD. Also, talk about which would be the best choice for you.

Before deep dive into types of SSD. Let's look at SSD

SSD stands for Solid State Drive, and it is the successor of HDD. There are lots of advantages of having SSD over HDD.

1. Performance of SSD is better than SSD.

2. Like HDD, SSD does not have movable parts. So, SSD can be moved here and there.No problem.SSD has a better lifespan.

3. As SSD does not have movable parts so, it does not produce noise.

SATA stands for Serial ATA introduced in 2003 which is a storage connection interface. It is the replacement of PATA technology. 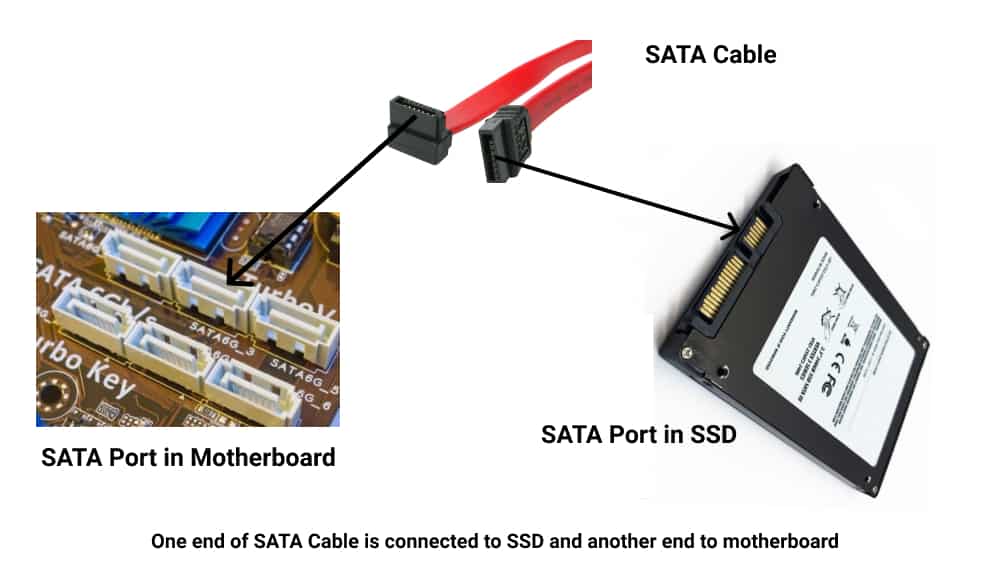 There is 3 noticeable revision of SATA SSD available as listed below.

Note that Gb and GB are different.GB stands for gigabytes, Gb stands for Gigabits.1 GB = 8 Gb.

The cable used in all SATA I, II, and III SSD are similar and can be used interchangeably. Note. Performance varies in various types of SATA but not in the cable.

In today's modern desktop computer we found SATA III SSD. And these are generally 2.5 inch SATA SSD. 3.5 inches is also available which is not common. But the connector for both of them is the same.2.5 inch SSD is lighter, smaller, and cheaper than 3.5 inch SSD. 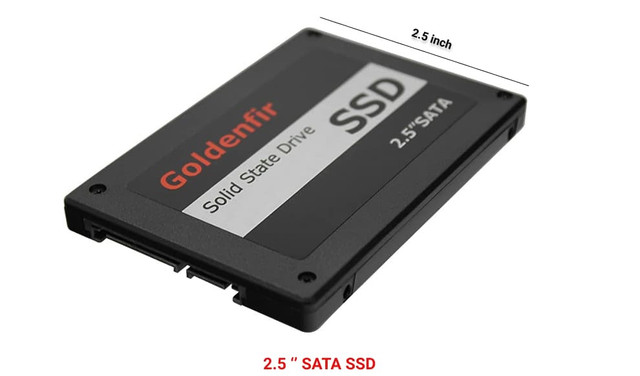 Before discussing NVMe SSD, let's know about M.2 Port and U.2 Port

There is one interface found directly connected to the motherboard which looks like below. It is attached parallel to the motherboard. This M.2 port/socket support SATA SSD and Some support NVMe SSD but not both. Those SSD which is inserted into M.2 Port are available in various form like 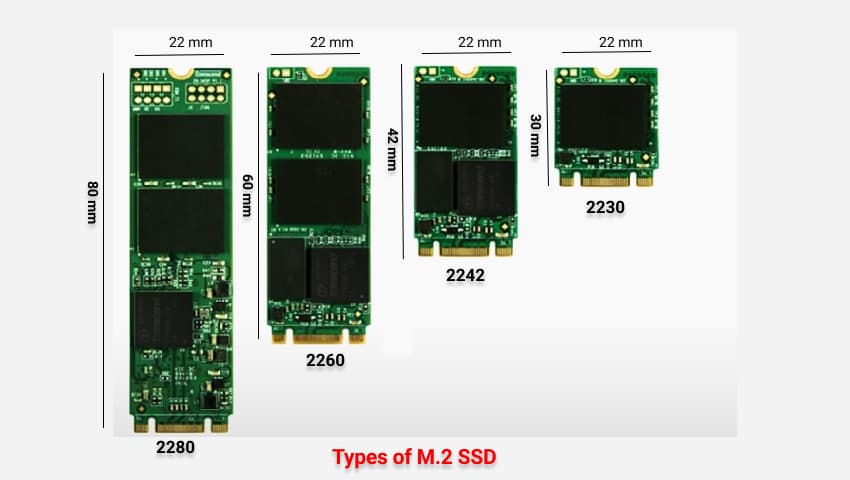 Longer the length, the better the performance, so 2280 performs better than 2260 SSDs.

If you have an m.2 port then when you look at the back panel of the motherboard you will find mounting of those ports as shown below.

Actually, M.2 SSD is targeting the laptop motherboard because here all peripheral in the laptop is attached in a compact form.M.2 slots use PCIe bus (called as NVMe SSDs) and some M.2 slots use SATA Bus (SATA III SSD).

Under certain configurations, these M.2 slots can be used for Bluetooth, Wifi, USB 3.0 but, it is specially designed for data storage devices.

U.2 is applied for NVMe SSDs in 2.5-inch format. Initially, this interface is called SFF-8639. It uses PCI Express U.2 port.
This port is opened to the external world and you can plug 2.5-inch SDD on it.U.2  has a higher storage capacity than M.2.It is a double-decker connector and has a similar double-decker cable connected to it and SSD.

So, go with M.2 SATA SSD, if performance, physical space is your top priority.

What to do if no M.2 Slot?
Ans: You can buy PCIe M.2 adaptor and attached it in a PCIe slot like you installed any other peripheral and on that adaptor attached M.2 SSD.

NVMe stands for Non-Volatile Memory Express is an interface protocol specially designed for SSDs.They use PCIe buses for data transfer. Some of the PCIe versions in the motherboard: PCI-E X16, X8, X4, and X1, etc.NVMe SSD uses PCIe X4 SSD.

PCIe is having a very high data transfer rate because data send/receive from/to is directly connected to the CPU.PCIe can provide more bandwidth via fast signaling and multiple lanes. Whereas data transfer by SATA bus is not connected directly to CPU, first data is sent to RAM then to CPU.So, due to direct connection to CPU, SSD based on PCIe (ie. NVME SSD) performs better than SATA-based SSD.

Overall comparison of SATA SSD and NVMe SSD are given below

Here, I will point out these different types of SSD on the basis of Key. 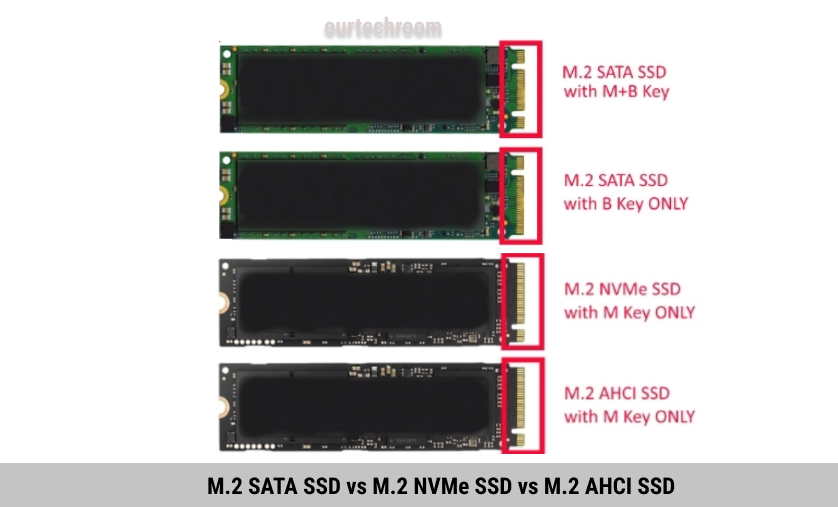 There is more chance that every laptop, phone, and tablet you buy will already have or will have soon NVMe Options. Also, the cost of NVMe is getting down and capacity is going up due to rapid progress in technology.

How to Check if your System has NVMe or SATA SSD?

In Windows System, go to Run and type devmgmt.msc and press enter. Then under disk drive, you will get your drive. Just copy the drive model. In my case: "Drive Model: INTEL SSDPEKNW512G8" and then just search it on the web and will get your drive information from the official site.

We can easily check whether the System is having SATA Controller or NVMe Controller by using third-party software like HWinFo.

Here, we can clearly see that my system is having NVMe Controller as shown below. 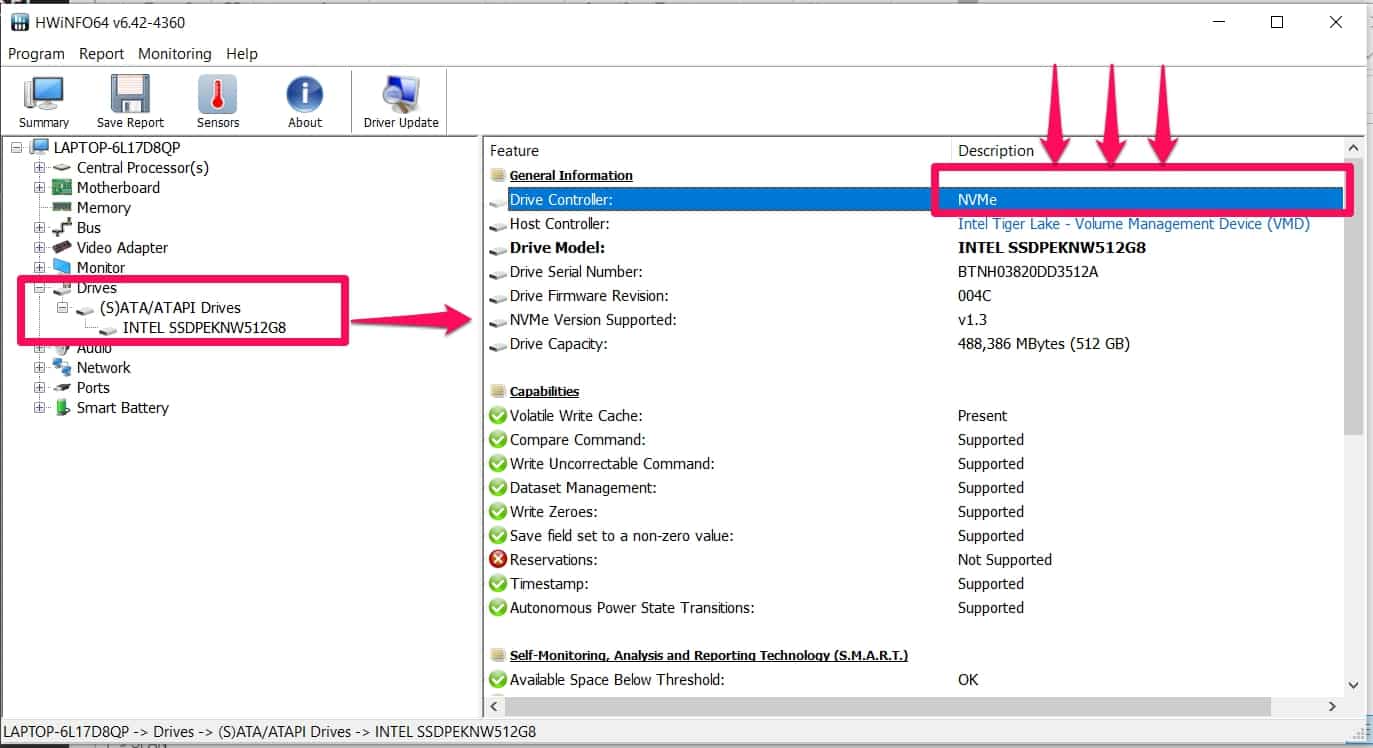 If you have SATA, then will have Drive Controller: Serial ATA.

Which SSD to Buy?

1. Speed: If you want an extremely fast SSD then buy NVMe SSD.

If you want fast speed SSD under less Cost then go with M.2 SATA SSD. M.2 SATA SSD are not fast as NVMe SSD but it's OKay to use them.

Ans: Older motherboard does not support NVMe.Older BIOS does not recognize it.

Ans: No, their port and socket configuration is different.

Ans: Yes you can. They both use SATA and their configuration are the same as shown below.

Ans: No, they are different.

5 Is SATA or NVMe better for gaming?

Ans: For gaming purposes, NVMe is better than SSD.NVMe SSD significantly increases the performance of the games.

6 What are SSD Form Factors?