Why are apps suspended in Windows Task Manager? In this guide, you will also know about types of processes, what is suspended application is, why the application undergoes a suspended state, etc. Some awesome? Let's get started right now.

What is the Suspended Process?

Ans: Suspended Process are those process which has been turned off temporarily. When a process is temporarily suspended then later on it will restart from exactly the same state where it was stopped. So, the state of those processes must be stored somewhere else on your PC. If a process is in a suspended state then it doesn't consume any of your CPU, memory, and network. Technically speaking many operating systems saves these process(active, terminated, suspended) in a table structure called process table, which is the array-like structure for each.

Where to find which applications are suspended in Task Manager?

Ans: The Suspended State of process and application is displayed in the Status column in Task Manager. 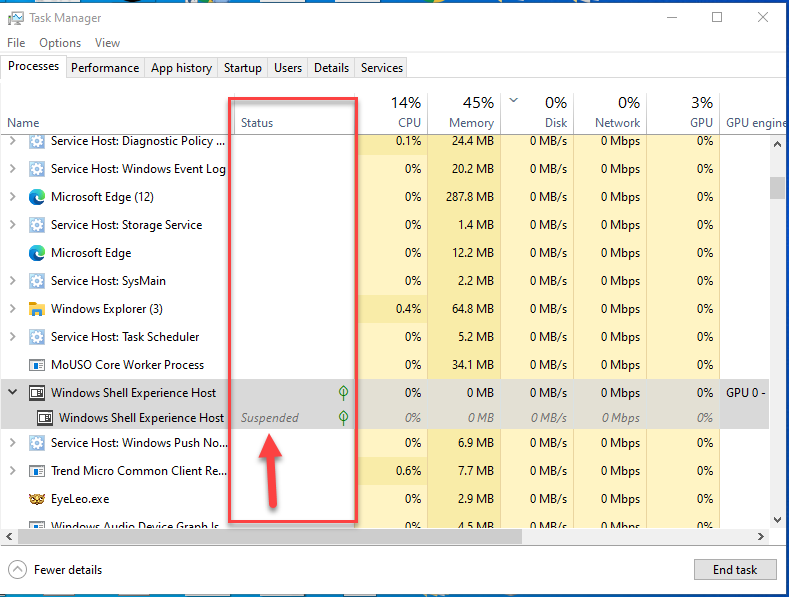 Also suspended process has a green leaf at the side.

Why does OS suspend Process and Application?

Various reasons for Suspend Application are:

1 If you minimize the program and work on other processes and apps, the OS may consider it to be in a suspended state to avoid wasting CPU cycles. And when you maximize then it will go into an active mode and starts using CPU cycles.

2 When you boot your operating system, many applications and processes operate, and all of them are not now active, such as Outlook Mail programs. As a result, this mail will be suspended, and as soon as you get or use mail, this mail app will be active.

3 If process A is using a shared file and some process B is requesting for the same shared file then process B will go into temporarily suspended until process A stops for a certain time frame and then B enters immediately. This is done to prevent deadlock.

4 If the application waited for an event to happen for a long period of time.

The application undergoes suspension when:

1 Process is just created and is in the ready state then it can go to ready suspended state and swapping out of main memory and placed in external storage by scheduler. Will be available for execution whenever it is loaded in the main memory.
2 Then the process is running and it can be blocked and the blocked process can go suspended and wait for an event called Blocked Suspended. This especially occurs if the process was performing IO operation and lack of main memory and moved them backed to secondary memory.
3 Blocked Suspended process can be unblocked and go into a ready suspended state and from there it can resume the process.

How to manually suspend the process or program?

With these steps, you have successfully suspended the process. Once it is in suspend state CPU cycles are not used. You can resume the process by right click on the same process and then clicking on Resume Process.

Can we kill Suspended Process?

Ans: Yes, We can kill the Suspended Process with admin rights.

With task manager(admin privilege): Right-click on the process in task manager > End Task

With Command Prompt (with admin privilege): Type below the command

How to get all suspended Processes in Windows 11/10?

We can use Powershell to list all suspended Processes and Thread in Windows 11/10. Scripts look like this:

Copy and paste this script in Powershell and you will get the list of all suspended process as shown below.

Why searchui.exe is suspended in Windows 10?

SearchUI is a component of a Microsoft search that allows you to search on the taskbar. Sometimes Windows suspend SearchUI.exe for the various reason some of them are as follows:

Why is Cortana suspended in Task Manager?

Ans: Cortana includes SearchUI as one of its components. Therefore, you won't be able to run Cortana in the background if you discover that the searchUI.exe process has been suspended.

What is ShellExperienceHost Exe suspended?

ShellExperienceHost.exe is an executable file that plays an important role in displaying universal apps on a Windows machine. This process also manages the taskbar, the transparency of the Start Menu, the calendar, the clock, and other features.

It contributes to the overall attractiveness of the UI.ShellExperienceHost is placed in a suspended state on occasion by Windows as a result of the executable's tendency to use a significant amount of system resources. They will automatically unsuspend by the system.

Why does Chrome keep getting suspended in Task Manager?

This issue might have been brought on because the data that makes up a user's profile in Google Chrome became corrupted. There is also the possibility that it was brought about by add-ons, plugins, cookies, or the History.

What is Windows suspend mode?

The suspend mode of a computer is a setting that uses very little power resources and helps reduce the amount of electricity used by the system by turning off any components that are not currently being used. The vast majority of laptops will go into a state known as suspend whenever the system is powered by batteries or the lid is closed.

What does the Yellow Pause symbol mean in Task Manager?

The Yellow Pause symbol is Suspended Mode in Windows 10 and 11.