Why AMD processor has pins and the Intel processor does not pin in it? Both Intel and AMD are recognized as industry leaders among computer processor manufacturers. TSMC is responsible for the production of AMD processors, whereas Intel designs and develops its own chips. The rapid progression of technology has led to the development of a variety of different types of CPU sockets, such as LGA, PGA, and BGA. While AMD often makes use of the LGA socket, Intel employs the PGA socket.

Now let's discuss the topic "Why AMD processor has pins and the Intel processor does not pin in it?".

AMD processor or Intel Motherboard processor Socket has the pin in any way because pins are needed for establishing electrical contact between processor and motherboard.

AMD Processor - Pin on CPU not on Socket 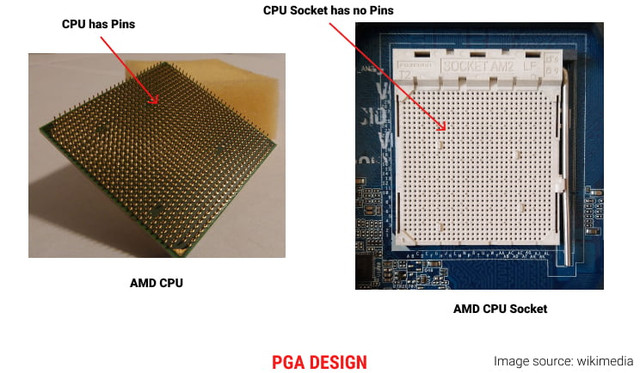 Advantages of Pin in Processor or PGA Design

2 If pins slightly bend in the processor because there will be sufficient gaps between each pin to correct them which provides better repairability.
3 Pin in the processor are thicker and will be easier to install.

Intel also used to use a PGA socket in the older motherboard which later started using an LPA socket.

Also Read: Parts of Motherboard and its Functions

Intel Processor - Pin on Socket not on CPU

Intel Processor uses LPA(Land Grid Array) socket in all of the CPUs since 2004. Here, Processor itself doesn't have pins in it and the socket has pins. 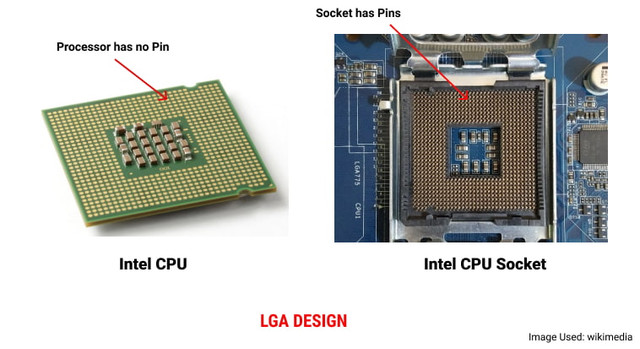 Advantages of Pin in Processor Socket or LGA Design

3LGA pins are built in the processor sockets and the physical size of those pins are comparatively smaller than PGA pins so more pins can adjust in the same amount of space in LGA based processor. If more space then will be more contact between socket and processor and that helps in introducing stable power delivery and high-speed features.

4. There will be less leakage of electrical current.

5 LGA processors are easier to remove or replace even after many years of usage.

6 It is said that the LGA socket is a more secure socket.LGA provides a much firmer and safer anchorage, putting pressure on the pins and ensuring a more evenly distributed load on the pins.

Also Read: Why AMD CPU is cheaper than Intel CPU?

From the consumer perspective, it is to note that whether it has pins in the processor or pins on the processor socket, the performance of the CPU does not get affected. Both of them has up and downside. But LGA socket will be sure more preferable in the future because the number of connection points will grow in the future, AMD will have to leave the PGA socket in order to keep the CPU small.

Are AMD Sockets compatible with Intel?

Ans: No, you cannot use an Intel processor in AMD sockets and vice versa.

Why Processor have many Pins?

Ans: Because it is required for lots of power and signals.

Why does AMD use Pin on Motherboard Socket in Threadripple Processor?

Ans: As we know Threadripple processor is used in high-end computers they require a large number of pins for getting all the functionality like supply voltages, buses, channels, cores, and many more. It has altogether 4094 contacts between CPU and CPU sockets and if maintain 4094 contacts by using 4094 pins then CPU size and CPU socket may require a larger size which increases the cost of production.

Also, this Threadripple processor is an expensive one and if it has pins in the CPU then it will be difficult to handle and accidental damage would be heightened.

Can you put an Intel CPU in an AMD socket?

Ans: No mostly due to the fact that their architecture and technologies are different. Both the Intel CPU and the AMD socket lack pins. The Intel CPU also lacks pins in its socket. Therefore, you are unable to attach one another, and there is no locking/attachment that takes place between an Intel CPU(no pins) and an AMD Socket(no pins).

Therefore, it is not possible to install or replace an Intel CPU in an AMD socket. Therefore, they do not cooperate with one another.

Can CPU works without Pins?

Ans: If your central processing unit (CPU) is an Intel model, then you are in luck because Intel CPUs do not have pins. If your computer has an AMD processor and any of the pins are bent, then it won't work.