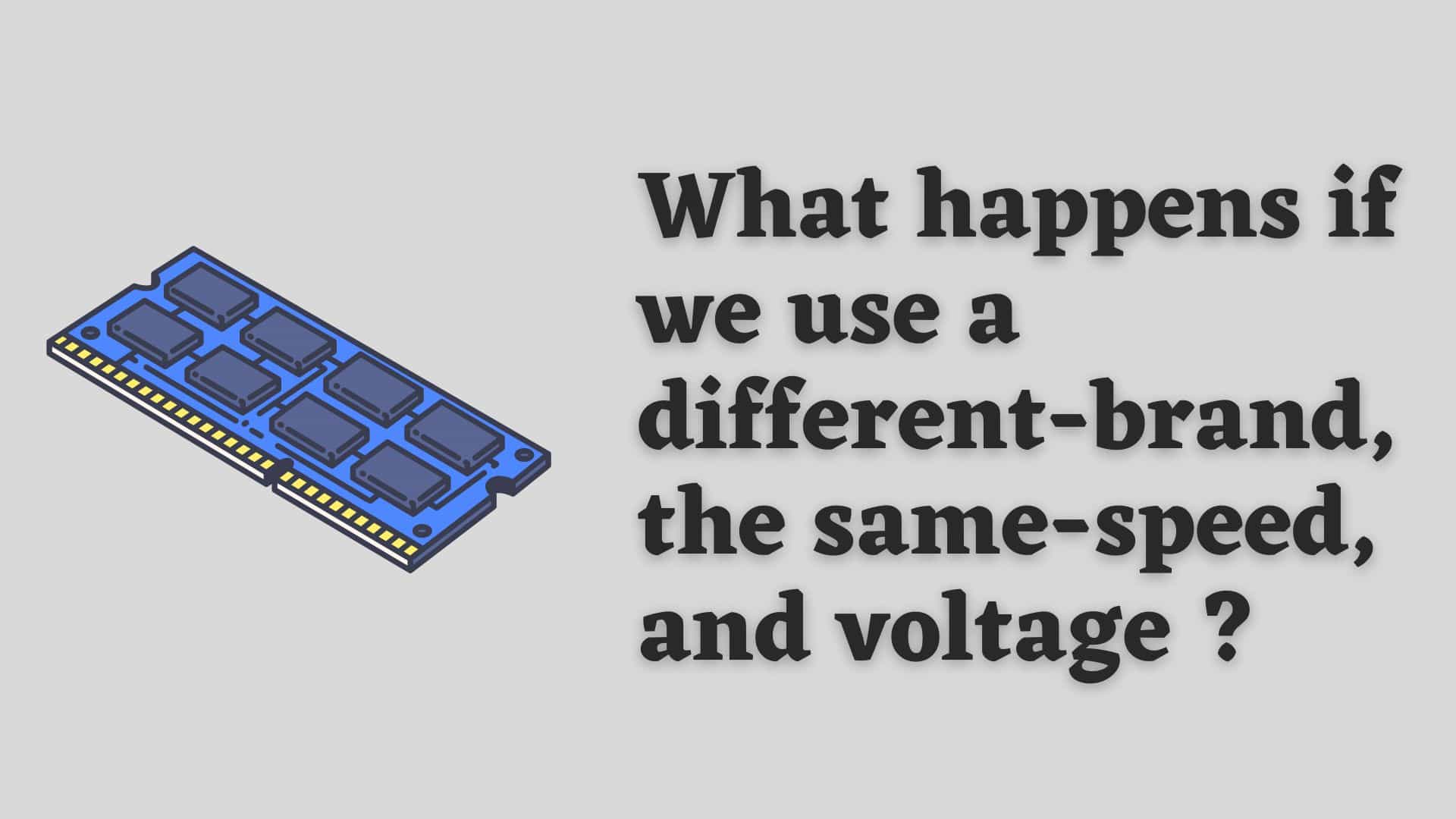 Have you ever been on the lookout for RAM and been confused because of all the components? The brands. The speeds. The voltages. The channels. The latencies. We will discuss them all. Follow us along in this detailed article where we get to know all the components that make up the RAM and how RAM really works.

The Components of a RAM

There are various components in the RAM. Let us take a look at each of them and what they do.

1rx8 Vs 2rx8 Memory Modules (Stick,...
1rx8 Vs 2rx8 Memory Modules (Stick, Rank): Explained (2022)
When looking at RAMs, you might have come across the speed of the RAM multiple times. 2666Mhz, 3200Mhz, and 3600Mhz are the more popular speeds as of writing this article. However, since the release of DDR5, we are seeing a rise in RAM speeds all the way to 6200Mhz. The biggest shift in performance while on DDR4 memory is between 2133Mhz to 2666Mhz and then from there to 3200Mhz. Generally, the sweet spot for current systems tends to be 3200Mhz. But don’t go rushing to buy a 3200Mhz RAM already.

The voltage in RAM ranges between 1.2v to 1.5 v. The default voltage for DDR4 modules is 1.2v. For DDR3 however, it is 1.5V. If the voltage isn’t matched based on the CPU present in the computer, the system will be prone to failure and will result in a loss of productivity.

For the most part, the RAM brand doesn’t matter. As long as you’re buying from a trusted and reputable brand and not some shady brand, you can’t go wrong here. However, what does make a difference is the manufacturer of the chips that are on the RAM module. Make sure that you check who has made those chips for the best results while pairing the RAM.

Latency means a delay in processing. It is the number of clock cycles needed by the RAM module to access a specific set of data. And make that data available to the output pins when the memory controller tells it to. While buying RAM, you might have noticed that the spec sheet contains the latency of the RAM. It is generally called CL-16 or CL-19 or CAS 16. Whether or not this makes a difference depends on what you want to focus on this on what you’re going to do with the system. If you’re into hardcore first-person shooting games, you’ll be better off with low-latency RAM. If you want to simply do some office work and don’t care much about gaming, you can opt for the higher latency. However, the general consensus stands that the lower the CAS latency is, the better the RAM.

DDR4? DDR5? What difference does it make?

The full name of DDR4 RAM is DDR4 SDRAM. This stands for Double Data Rate Version 4, Synchronous Dynamic Random Access Memory. DDR5 is the latest version of the RAM. The first DDR5 chip was officially launched by SK Hynix on October 6, 2022. As of writing this article, the RAM has become much more stable but still stays expensive with the cheapest 4800Mhz, 8 gig memory selling for 39$. Meanwhile, an 8 gig DDR4 memory with a speed of 3200Mhz costs around 25$. Check out our article on RAM here.

In the multiverse of RAM, you’ll hear the terms single channel and dual channel quite often. In simple terms, if you have a single stick of RAM in your PC, it is called Single Channel. But if you have multiple sticks of RAM in the right slots, it’s called Dual Channel. A dual-channel configuration is preferred over a single-channel one because the load is more spread out between the modules. No, for the most part. If you mix up the brands but have similarly specced RAM modules, you will get along just fine. However, you should pay attention to the manufacturer of the chips present in the module.

If the RAM that you already have has chips manufactured by SK Hynix, you’re better off getting similarly specced RAM with chips from SK Hynix.

If you are only using two sticks of RAM and are willing to tweak around a few things in the BIOS, you can have a smoothly functioning computer without problems. However, the higher the number of modules, the greater the chances of some kind of failure.

Also read: Why is Committed Memory larger than Actual Memory?

Does Mixing the Sizes of the RAM matter?

You can use different-sized modules. For example, you can combine a 4GB module with an 8GB one to boost your primary memory up to 12GBs. This will still give you a dual-channel model. This type of dual channel is called Asynchronous Dual Channel. With asynchronous dual channel, you can still reap the benefits of dual channel memory. But only as long as a single task doesn’t occupy more RAM than the smaller module’s maximum.

For example, if you have a system with 8 and 4 gigs of RAM and no single process occupies more than 4 gigs of RAM, you’ll be just fine. But as soon as that 4 gig bar is crossed, you will see a drop in performance.

What is the best way to go?

The best way to go would be to chuck out the RAM that’s currently in your PC and sell it off on eBay or Facebook marketplace. And then get a new set of RAM from the same company with the same specs. This will save you the hassle of having to look for the specs that limit the PC’s performance. Furthermore, it’ll open up a wide market of much better specs RAM which will end up giving you more performance than you imagined. Also read: Can we use different RAM frequencies?

In a nutshell, you can’t go wrong buying RAMs from different brands. As long they have the same specifications. However, in order to avoid any problems related to the RAM, you are better off buying two of the same RAM from the same company and having the same specs. A good set of RAM can improve the performance of a PC by a large margin. While a bad set of RAM can mess a system up so badly that you’re stuck in a boot loop and can’t figure out what is going on with the system.