What will happen if SSD reached the TBW limit ? These days, thanks to advancements in storage technology, solid-state drives (SSDs) are increasingly replacing hard disk drives (HDDs) in consumer and industrial applications because of their features such as fast startup times, small random read delays, fast read-write speeds, anti-fail performance, and low power consumption(source). SSDs, on the other hand, have a shorter life span than HDDs.

As a result, the user is mainly concerned about the lifespan of the SSD. There is an essential phrase that is extensively used in SSD to define the life time of the SSD, and that is TBW.Here in the article ourtechroom will explain you about What is TBW and What will happen if SSD reached the TBW limit ?

What will happen if SSD reached the TBW limit ?

4 TB SSD - everything to know here
4 TB SSD - everything to know here
Every electronic equipment has a lifespan. One of the numbers that tell about it is TBW. Total Terabytes Written over Time (TBW) refers to the number of cumulative writes made on a disk that you can reasonably expect to finish during its lifespan. It is the manufacturer's expectation for storage devices and offers information on when your SSD has a high possibility of degrading and failing after that period and may plan for the replacement.

This specifies how many writes you can execute on your disk smoothly, and after that amount, the manufacturer does not guarantee the output. At this time, it is recommended that you replace the drive because the data on it is no longer as safe as it previously was. When the drive reaches that point, it's probable that you'll need to replace it. But note that this is a very high value and most of the users do not reach that value.

This is a metric that is allocated to storage devices to indicate the amount of storage space the drive can hold before the memory cells within it begin to degrade and the risk of data loss or perhaps the entire drive failing increases after that threshold is reached.

You may find this information like TWD in SSD specs.

This is something you must know. SSDs nowadays store data in NAND flash memory cells to store persistent data. By varying the electric charges of the cells, programming data is written and rewritten onto these cells. Only by erasing previous data, you can rewrite each cell. This procedure is known as the program/erase cycle or P/E cycle.

Each cell on the SSD has a defined write capacity or a specific P/E cycle, and the SSD fails writing on the cell for a predetermined number of times.

Also Read :Cause, Signs, and Symptoms of Faulty Motherboard

You should be aware that SSDs fail by repeatedly writing to the same cell. When the drive has no free blocks available, it is said that "Worn out" has occurred, and there is a likelihood that your SSD will entirely goes into write-protected mode, and no more writes will be permitted. And after that only a read permit is available.So, we can say SSD could only be utilized reliably before the memory cell is worn out.

Also note that, when cells are rewritten, the write speed decreases steadily while the read speed stays constant.

As NAND has finite TBW so during the process of P/E cycle there can be following things going on technically:

1 Physical blocks can get bad and will be decommissioned.
2 Increase the raw bit error rate and the possibility of an uncorrectable data mistake.
3 Data retention time get reduced.

For example, if the drive is rated for 200TBW and has a warranty duration of 5 years, this indicates how many writes the drive can withstand before needing to be replaced.

How much is 200TBW? How much do you have to write on the disk?

Also read: Parts of Motherboard and its Function Explained

Do SSDs have unlimited read even when they have TWD?

Even though the SSD has reached TWD, there are no restrictions on reads. After crossing the TWD barrier, your SSD is more likely to convert to read-only mode.But reads also suffer from following this:

How old is your SSD, and how many TBW does it have?

For checking how old your SSD is and how many TBW does you have , you need a software like CrystalDiskInfo

3 Then you will get the interface as shown below.

Here you will see Total Host Writes label. In my case I have written/rewritten 12617 GB

and searching it on web I found out the TBW of the SSD which seems to be 100TBW which means I can perform commulative write to harddisk for 100TB. 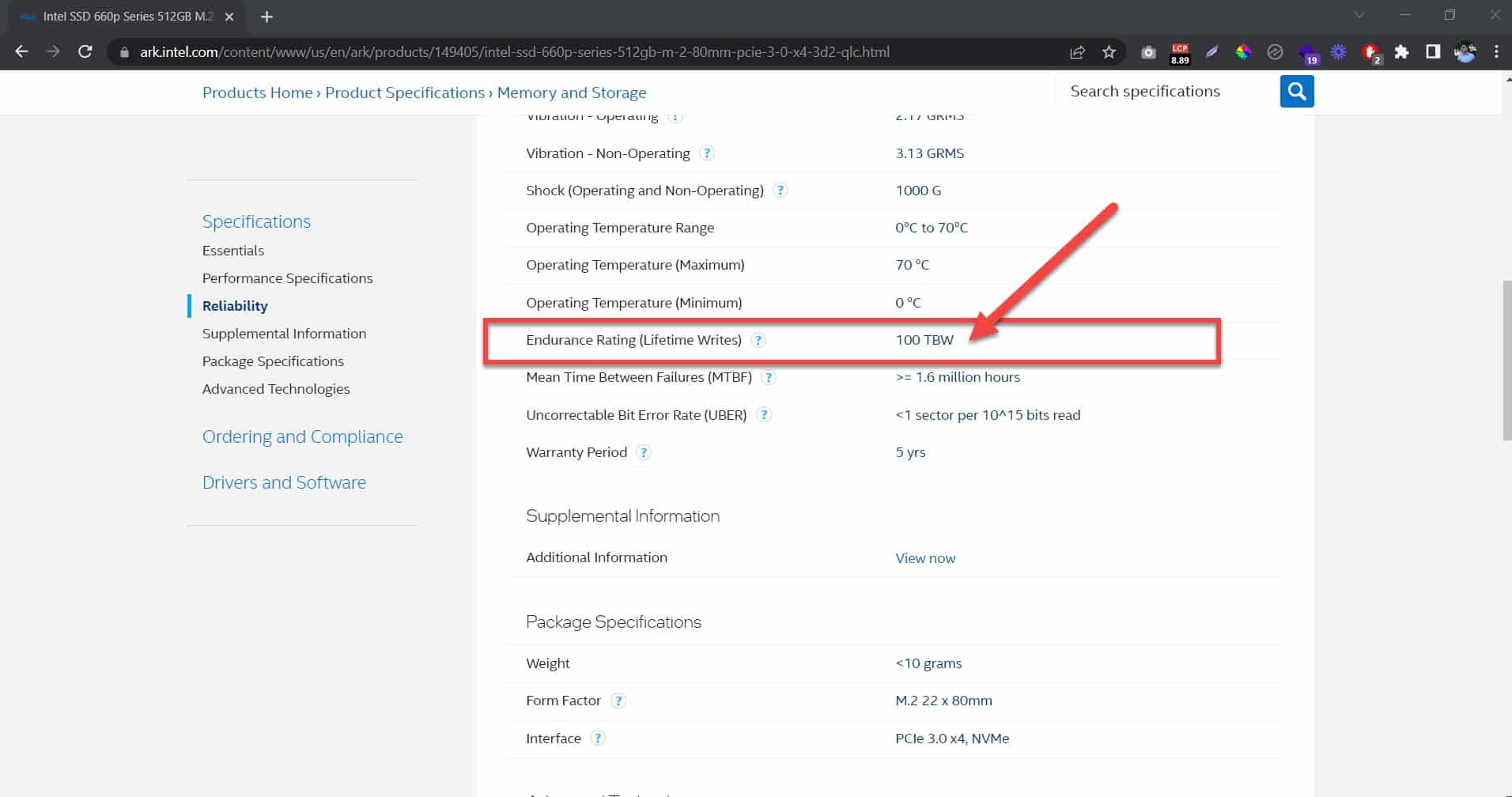 Is Rewrite is Slow than Write SSD ?

Ans: Yes, clearly, rewriting SSD is a slower operation than writing because when you write on SSD, nothing is erased, however when rewriting, prior data must be erased, which can be a costly activity that wears down the disk after a certain number of writes.

Does TWD matter if I run SSD continuously 22/7?

Ans: If you write continuously, the SSD will function normally until it hits its maximum TBW.So it all relies on how much data your computer can transmit to the SSD on average in a 24-hour timeframe.If you use SSD for general jobs that do not need recurrent writes to the disk, it has no effect even if you run ssd 24/7.

What does "TBW" mean in the context of SSDs (solid state drives)?

Ans: It denotes how good your SSD is and how long it exists and run smoothly without any problem.