The Secret Of CPU HYPERTHREADING In Depth In fact, most of us are unfamiliar with Hyperthreading technology. However, this technology is not new to the world. Intel has been using it for about 18 to 20 years. This technology represents one of the most significant revolutions in the processor industry.

If you are a gamer or a technology enthusiast, you should be interested in this technology.

HyperThreading Technology is originally developed by Digital Equipment Corporation, however, it was brought to market by Intel with x86 bit architecture Foster MP-Based Xeon Processor in February 2002 and in Pentium 4 Desktop CPUs in November 2002. This Intel Pentium 4 with a 3.06 GHz processor was the first processor in history to break the 3 GHz barrier (officially announced). Intel Pentium 4 becomes the first HyperThreading desktop processor. So, we can say the Pentium 4 desktop was the first to process two independent threads at the same time.

Later, in the Itanium, Atom, and Core ' I ' series, Intel also included the technology.

Intel has already licensed the patents for "Hyperthreading" in 1997 AD and was bought late to the market in 2002 AD.

There are mainly three types of CPUs available in the market.

In a single-core-based CPU,  multitasking is done with context switching but can do just one task at a time. Each core has only one thread. Then came MultiCore CPU

Also read: Can I start a computer without a CPU Cooler? 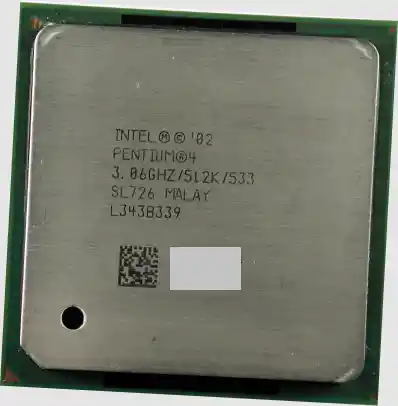 Hyperthreading Technology is a hardware technique of the simultaneous multithreading (SMT) implementation from Intel and is mainly developed to improve overall superscalar CPU performance by properly utilizing CPU idle time while performing several tasks. It's usually known as HT Technology.

SMT is the most widely used multithreading technique nowadays.

Also read: Why AMD CPU is cheaper than Intel CPU? 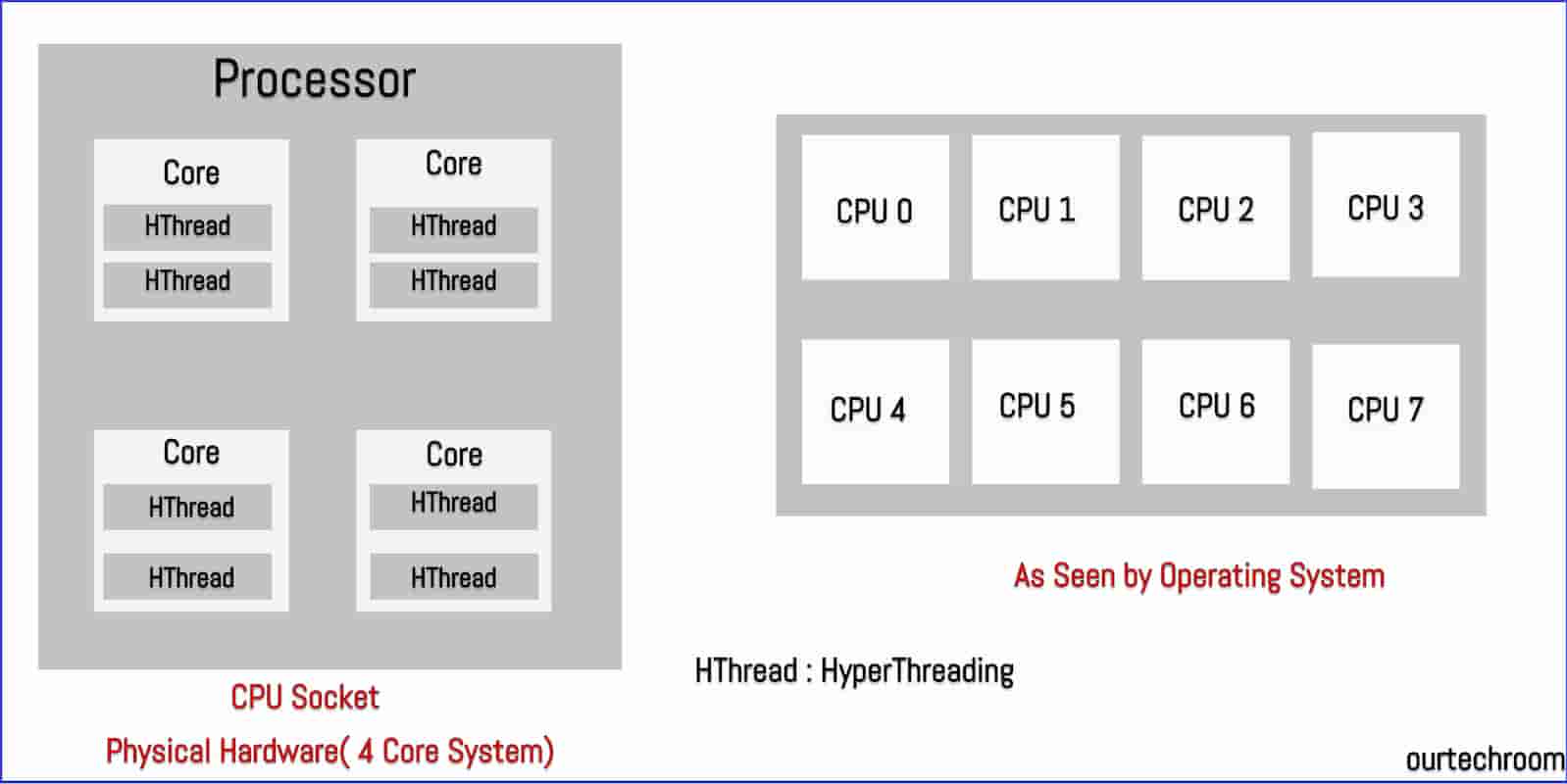 If I have a computer that has a 4-core processor, and runs two threads per core, then

Explanation: This above-mentioned hardware has a 4 core (4 physical processor units) processor and has 2 threads in every core so this has a total of (4 *2) = 8 logical CPU.

In a nutshell, we can run a lot of applications at the same time with high performance if you have a hyperthreaded CPU. Also, Hyper-threading usually doesn't make your CPU much faster, but what it does is make it smoother and more responsive and help you clean up the hits and stutters that occur when you run out of threads.

Hyperthreading creates two logical processors from one physical core. There are two separate hardware registers ( called architectural states) on each core. Therefore each hardware register has a separate program counter and stack pointer. But both of them will share internal microarchitecture components called execution units. So, hardware can switch between two threads ( two logical processors) by selecting register set A or register set B. 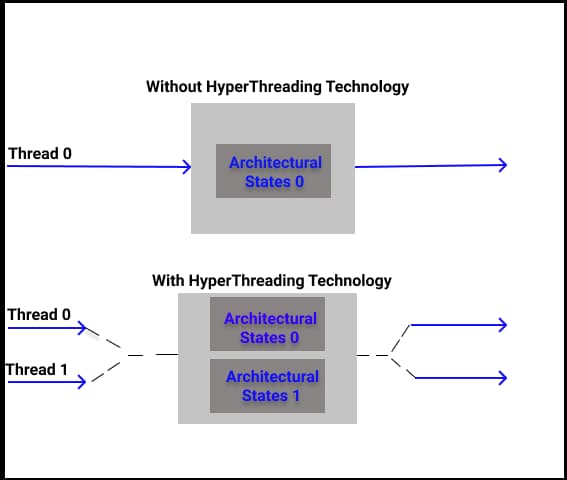 In other words, Hyperthreading helps to hide the latency of the memory and allows prefetch buffers and other elements within the CPU instruction pipeline to remain full by alternating the tasks. The tasks that they are operating on ensuring that all the various execution units within the CPU are basically busy at any given point in time.

Intel boosts up to a 30% performance improvement compared with an otherwise identical, non-simultaneous multithreading Pentium 4 Computer.(source)

Hyperthreading can't do much for a single-threaded processor in your computer where you can operate only one task at a time.

Also read: Why AMD processor has pins and the Intel does not have pins?

Hyperthreading is a valuable feature if your workflow consists of a long chain of resources using tasks and you need to do many tasks at once.

2 Workloads that make CPU load for a maximum of 100% of the time.

Hyper Threading's greatest advantage is that the CPU remains active all/much of the time. 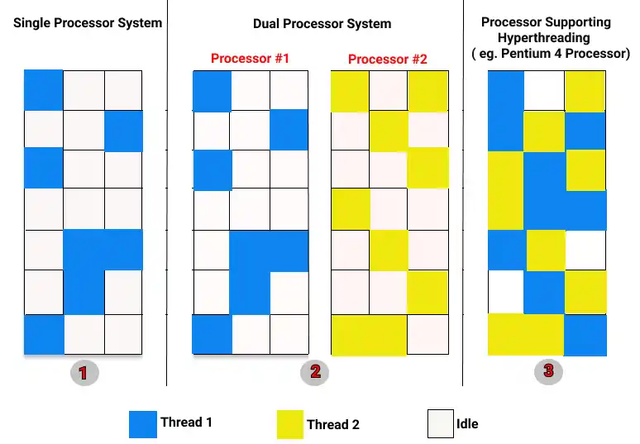 Check Hyperthreading is available in your System 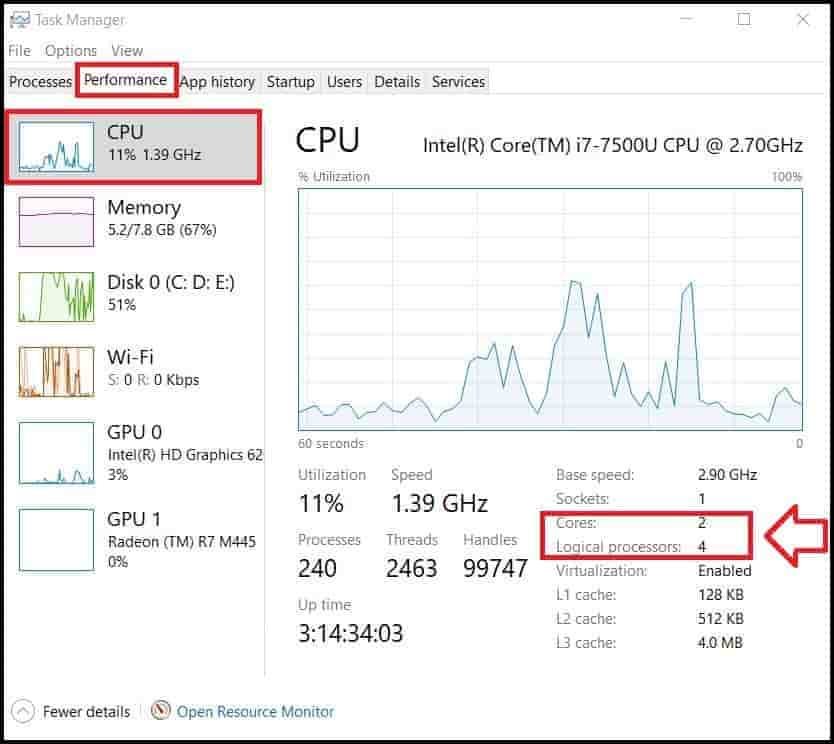 Open the command prompt and type "wmic" and press "Enter"

There you get the totally logical and physical processor as shown below:

Type lscpu in the command line and press Enter and look at the "Thread(s) per core" section as shown below:

If you haven't enabled hyperthreading in your system then these techniques will not work.

When to test Hyperthreading

You can test and know-how actually hyperthreading is helping if the below condition meets:

Also read: Parts of Motherboard and its Function Explained

It is also important to remember that hyperthreading is not routinely used by the system with the Windows Performance Monitor tool with a CPU load of 0 -50 per cent.

If there are two programs running in hyperthreading enabled system, let's call them Program 1 and Program 2. The operating system detects two logical processors and queues them (Q1). These two programs can run in two separate logical processors if they are available, and when they require shared resources, they must wait in the processor's internal queue (Qx). So they only have to wait for shared resources. This demonstrates that in the case of shared resources, only one program is influenced by the activity of another.

In the hyperthreading disabled system, Only one thread seems to be active at a time. As OS sees only one processor if one program is processing then another has to be in the queue even in the nonshared environment.

The goal of Hyperthreading CPU

1 If you have to buy a CPU with 4 cores then it cost more than 4 logical cores CPU. So the main goal of CPU hyperthreading technology is to minimize cost so that the logical processor technology will get more improvements in the future.

2 Also other is for making the CPU fully active all the time.

Also read: Can I use my computer without Thermal Paste?

Hyperthreading helps to fully utilize idle and underutilized resources of CPU and hence increase throughput for certain workload types. Some applications may observe a decrease in performance with hyperthreading and some found performance improvements and this is highly application-dependent because resources of the processor are shared between virtual/logical processors.

In parallel execution of threads, two threads run independently upon each other which is only possible if these two threads run in separate processors.
In a single cores/processor, concurrent execution occurs when threads always switch with some time slice and perform a job in a multi-threaded environment.

Overclocking is the process where motherboard settings are made changed and increase the CPU clock speed than the normal one.
This helps to increase the performance of the overall system. Practically useful for game applications because one application runs overclocked and performs better.

Hyperthreading is different. It is the process where 1 core of the processor behalfs as two cores to the operating system which allows two cores
to run concurrently with one another rapidly. This helps in increasing the performance of the overall system. Practically useful for rendering applications like MAYA, and Autocad, because hyperthreading allows multiple software to run at the same processing speed by interleaving.

Note that the Hyperthreaded CPU can be Overclocked.

1) How many threads are in a core?

2) How many cores does the i7 processor have?

Ans: In the i7 processor, hyperthreading is enabled so can process 8 threads at once.

4) Are physical cores better than threads?

Ans: If you want to get the best out of your CPU by scheduling intelligently then a hyperthreading-based CPU is one of the best choices. Tasks like Gaming, Video Editing, and 3D rendering may require a hyperthreaded CPU.

6) Is it better to have multiple cores or hyperthreading?

7) Does hyperthreading double the cores?

Ans: Hyperthreading does not double the physical cores but double cores logically. Suppose you have 2 cores with hyperthreading then you will have 2 extra logical processors. So, it behalf of 4 total processors to OS.

8) Does AMD use hyperthreading?

Note: Hyperthreading is just a name given for SMT by Intel.

Ans: It's not fair to say that a single CPU with hyperthreading provides equivalent performance of two full CPU cores.

Ans: When Hyperthreading is enabled, each physical core has two logical cores. This enables a single physical core to run two threads simultaneously. In terms of enhancing the performance of CPU-bound code, virtual cores don't do much.