Facebook Messenger is a powerful app that allows us to connect with individuals and groups. It has a lot of amazing features. Ignore Message is one of many useful features.

Ignore Message is extremely useful when someone or a group irritates you through messaging and you do not want their messages to be seen by you, you can ignore them. Ignoring someone simply means that you will not be annoyed by the Message Notifications.

Why do people ignore you in Messenger?

There might be various reasons for ignoring you in Messenger and some of them are as follows:

Also Read: How to Find Someone Facebook Posts, Likes, and Comments?

It is very simple to ignore someone in a messenger.

When you click on "Ignore messages", then Messanger clearly states that "You will not be notified when a person messages you directly, and the conversation will be moved to Spam." We will not inform the individual that the messages have been ignored."

Steps for "ignore Messages" are as follows:

1 Open Facebook
2 Click on Messenger Icon at the top right corner and select any one conversation you want to ignore as shown below.

3 Next, click on the down arrow icon and then select Ignore Messages.

4 In the next popup select "Ignore

The steps for ignoring a message from an individual using the Messenger app are simpler than you might think. The following are the steps.

1 Open Messenger App
2 Goto your conversation you want to ignore.
3 Click on the 'i' icon at the top and click on "Ignore messages"
4 Again Click on IGNORE. 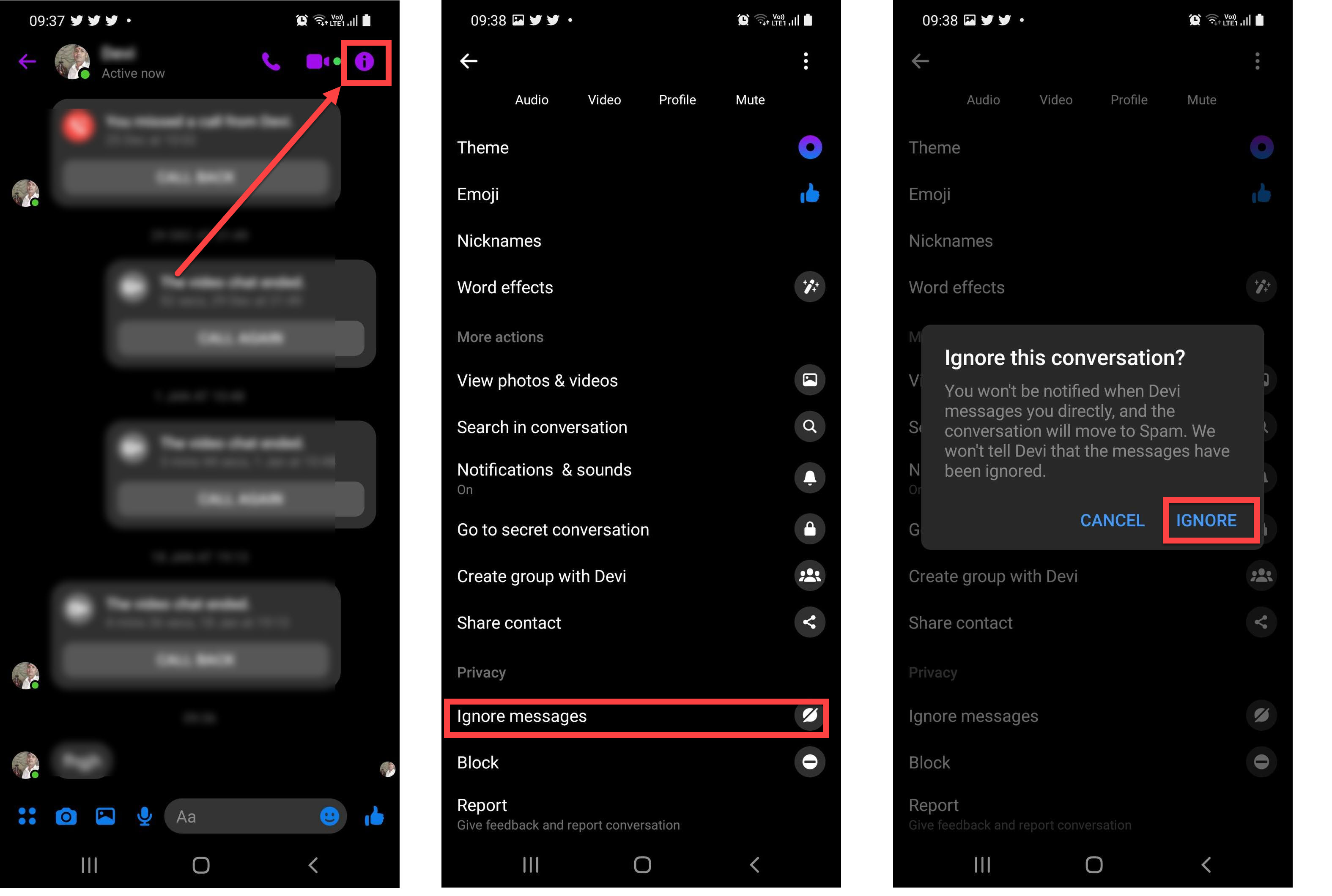 If you ignore someone's message, the message will not appear in your regular message inbox, will not notify you that they sent you a message, and will be routed to spam. If you reply to the spam message later, the sender will be able to start a normal conversation, and the message will no longer be classified as spam. And they can both start a normal conversation as before.

On messager, marking someone's message as spam is the same as blocking them from messaging you. They could no longer message you after you marked them as spam.

They won't know you read it unless you respond to the message. Also if you delete or decline the message then also they will not know you have declined or deleted the messages.

Some important things to know about 'Ignore Messages':

Can they see my active status if I ignore them on Messenger?

There is no connection between ignoring the message and the status of the messenger. So, if you ignore someone on the messenger they can still see you as active if you are active.

If you turn off the status in Messenger, not only will the person you have ignored in Messenger see you as inactive, but all of your friends will as well.

Can I UnIgnore Messages on Messenger?

Ignored accounts will not know that you’ve been ignored and you can unignore them at any time.

How to UnIgnore Messages on Messenger?

Step for UnIgnore Messages on Messenger is very easy. The steps are as follows.

1 Open your Messenger Apps
2 Goto your Messenger profile Photo by clicking on your profile photo at the top left corner.
3 Click on Message Requests
4 Under the SPAM tab you will get all messages you have Ignore.
5 Click on the Delete button if you want to remove the request else Click on the Block icon to Block the person.

How to UnIgnore Messages of Groups on Messenger?

Step for UnIgnore Messages on Messenger is very easy. The steps are as follows.

1 Open your Messenger Apps
2 Goto your Messenger profile Photo by clicking on your profile photo at the top left corner.
3 Click on Message Requests
4 Under the SPAM tab you will get all messages including your group's message you have Ignore.
5 Click on the Delete button if you want to remove the request else Click on the Leave icon to Leave the group.

Can Someone call me if I have to Ignore them in Messenger?

Yes, they can call you, but when they do, they will be greeted with the message "Did not answer," soon after that 1-2 seconds of the call as shown below. Also, those who ignore the call, i.e. you, will not receive any calls. 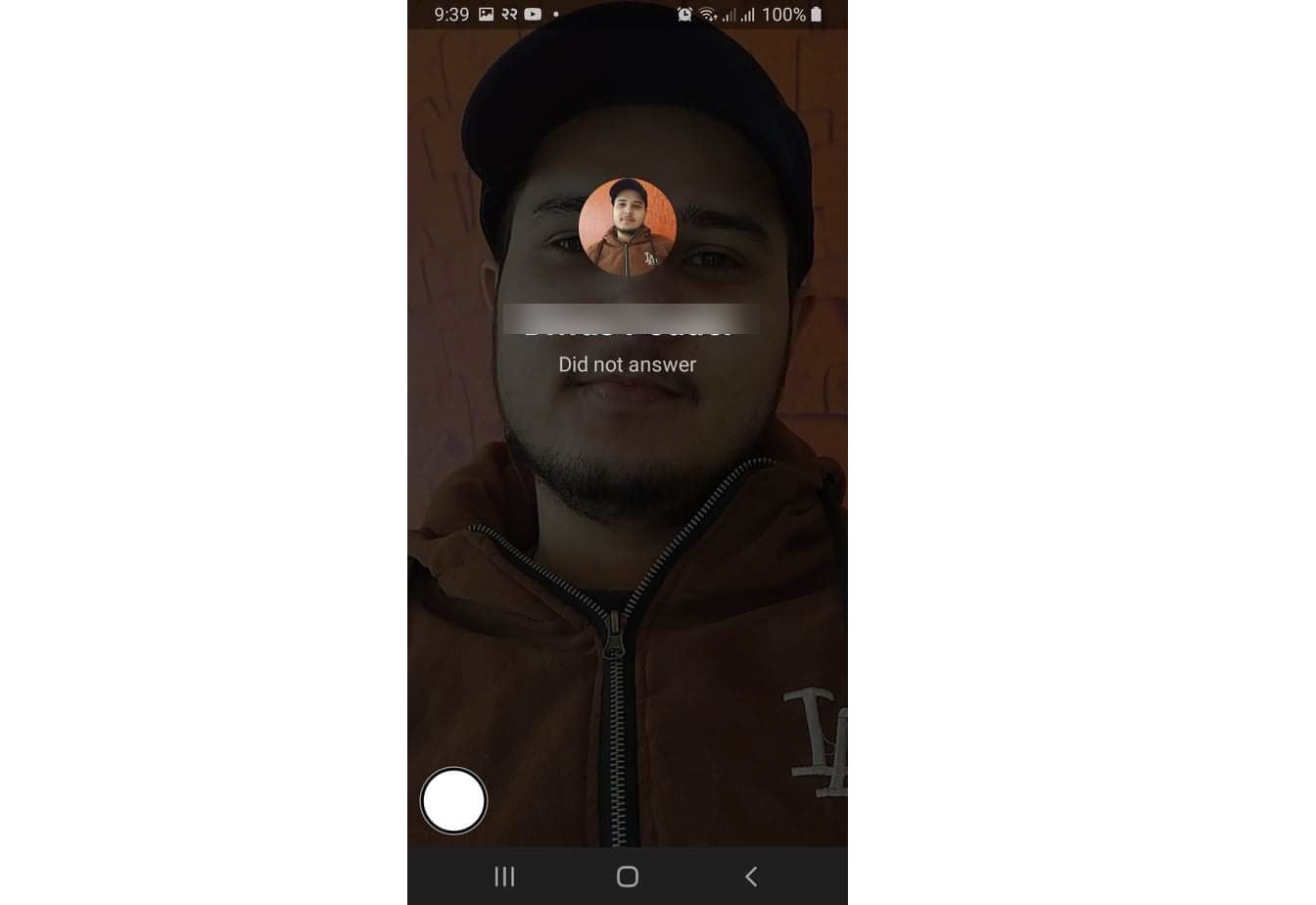 How do you know you've been ignored in Facebook Messenger?

Ans: To put it simply, there are no Messenger features that allow you to see who has ignored you, but you can try some of the options listed below. Please keep in mind that these are only educated guesses and may not be accurate.

1 First, call them in Messenger; if you receive "Did not answer" immediately they have most likely blocked you.

3 When both parties used to have regular conversations and they do not respond to messages later, it is possible that you have been ignored.