Everything you need to know about RAM Nearly every electronics device which does the processing of input given by us like smartphones, computers, laptops, tab, the calculator needs RAM for temporarily holding the data related to currently running programs and services.

RAM (Random Access Memory) is a volatile memory, which means that data is stored in RAM while the computer is running. RAM loses data when the computer is turned off. When we restart the computer, the operating system and other files are loaded from the HDD or SDD into RAM, and we can see the stored disk content on the screen.

Location of RAM in Computer

Looking at the logical flow of Data, we can say RAM is present in between your HDD and your Processor. But physically there will be many components in between like North Bridge and many more which we will discuss in the next topic and is beyond the scope of this topic.

What Happen if no RAM?

Even if you consider it the fastest hard disk drive available, the CPU cannot retrieve data directly from hard disk drives because they are too slow for it. Assume you have a SATA II interface HDD with a transfer rate of 300 MB/s. A CPU running at 2 GHz with 64-bit internal data paths will transfer data at 16 GB/s – more than 30 times faster than a SATA II interface HDD.

Generally,if you do not have RAM we can say our system will not start.

Coordination between RAM and CPU

The overall performance of your computer is determined by how well your  CPU and RAM coordinate each other. The more RAM your CPU has access to, the easier for it to do its work, which makes your computer faster. If you do not have a sufficient amount of RAM then your CPU has to work much much harder to transfer data and will hang the system and hence degrading the overall performance of the system.

How do know fault in RAM?

When you start your PC then it will beep 3 times (in most PC) if you have a fault in your system. Actually, this beep is generated by BIOS in the form of sound.

Actually what happens is if you have no RAM, then when you start your PC then BIOS POST(Power ON Self Test) will first search for all connected devices' information. If RAM is missing or has a fault then BIOS generates an error in the form of a beep sound or sometimes error will display on the screen(varies from system to system).

RAM comes with varies in Shapes, Speed, capacities many more.

Also Read: Can we use Different RAM frequencies?

RAM is organized and controlled in a way that enables data to be stored and retrieved directly to specific locations that are. 100.

Recall those old PCs used cassette tapes as memory: Tape-based memory is serial: If you want a byte of memory in the middle of the tape, you have to start at one end of the tape and spool through to the location you want. That was slow and boring right.

Also Read: Does Windows 11 use more RAM than Windows 10?

Actually, it is the transfer rate of RAM, which means RAM can transfer 64 bits of data at a time in one clock cycle.

Also Read: Parts of Motherboard and its Function Explained 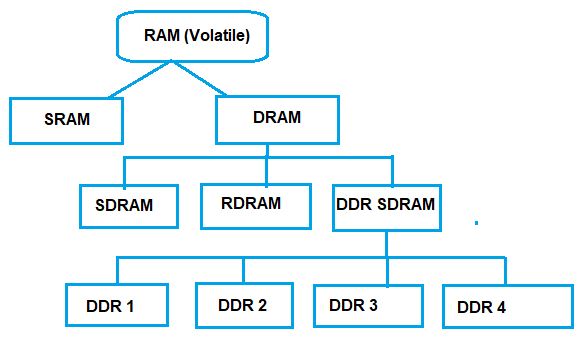 It is made up of 4 to 6 transistors. It keeps data in the memory as long as power is supplied to the system unlike DRAM, which has to be refreshed periodically. As such, SRAM is faster but also more expensive, so mainly used for the processor's cache memory.

Each DRAM memory cell is made up of a transistor and a capacitor within an integrated circuit, and a data bit is stored in the capacitor. Since transistors always leak a small amount, the capacitors will slowly discharge, causing information stored in them to drain; hence, DRAM has to be refreshed every few milliseconds to retain data.

Actually, DRAM operates asynchronously with a system clock, it means that this RAM runs slower than the system clock because this RAM signal will not coordinate with the system clock. It is not much faster and more expensive than SRAM. It is used in Computer's Main Memory.

Because here we use a capacitor which discharges time and again so that capacitor has to be dynamically recharged with electricity constantly.

It runs synchronously with a system clock. Here all signals are tied to the system clock for better-controlled timing. SDRAM also has a capacitor as DRAM but SDRAM is much faster than DRAM. One of the major disadvantages of using SDRAM is that it works in Single Data Rate which allows it to carry out only a single task per clock cycle. So SD DDR is developed. It is those type of RAM which is used nowadays on the Computer.

It was popular in the early 2000s and was mainly used for video game devices and graphics cards, with transfer, speeds up to 1 GHz.

RDRAM was a particularly expensive alternative to DDR SDRAM.

It is a type of synchronous memory that nearly doubles the bandwidth of a single data rate (SDR) SDRAM running at the same clock frequency which allows the transfer of data on both the rising and falling edges of the clock signal without any increase in clock frequency.

Its performance is better than DDR as its input/output buffer frequency is doubled.

This technology was released in 2007

It is an Improved version of DDR2.

It also doubles the speed of DDR2, again with lesser power consumption.

This technology began to appear in late 2007.

This technology began to appear in 2014. 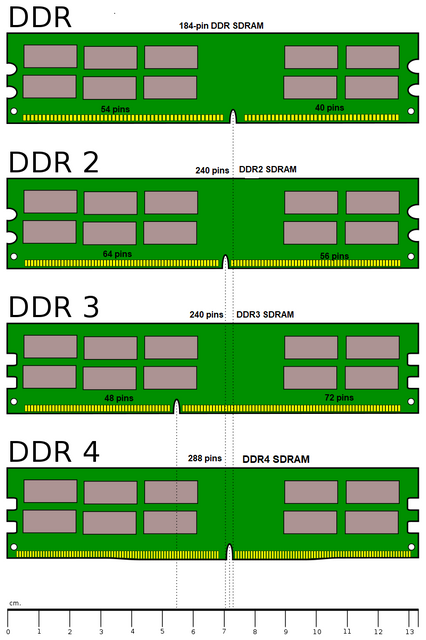 Fig: Types of DDR RAM
Below table data is from Wikipedia:

Is DRAM still in Use?

Nearly every computer on the planet makes use of DRAM, which is short for Dynamic Random Access Memory. It is the most often utilized memory type in computers because of its high performance and inexpensive cost.