Any two pieces of hardware may require some kind of interface to communicate with one another. This connector is known as a port in a computer system. So, in general, a computer/laptop port is nothing more than an interface or point of connection between peripheral devices (input/output devices) and the computer. Technically, they are just slots on your motherboard.

Functions of Laptop or Computer Port:

The primary function of this port is to allow one hardware component to be plugged into another in order for them to communicate with one another.

Ports come in a variety of shapes, including round (PS/2), square (RJ 45), rectangular (FireWire, USB, and so on), and trapezoidal (DB-25 printer port, DB-9 serial port). However, in general, this shape does not differ from one vendor to the next.

Ports on a laptop or computer can be divided into two groups based on how the port allows communication. Serial ports and parallel ports are the two types of ports. 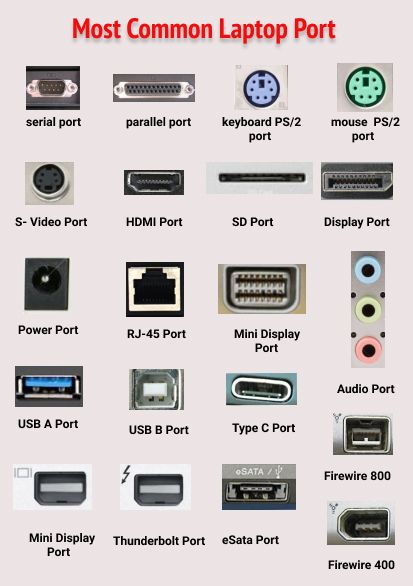 A serial port is an interface that allows serial hardware devices to communicate with a computer by sending one bit of information at a time over a single communication line.

This port is located on the back panel of your CPU cashing box, where serial ports are either two male DB-8 connectors (8-pin connector type) or one DB-9 and one DB-25 connector. A desktop computer has it, but a laptop does not. The real issues with serial ports are limited bandwidth and ports.

Parallel Port is an interface through where parallel hardware devices communicate with the computer by transmitting multiple bits of information at a time over multiple communication lines (or wires).

Let's look at how data flow in both serial and parallel port with the below image.

PS/2 port stands for Personal System/2 port which was introduced to the world by IBM in 1987. It was used by an older PC for connecting a mouse or keyboard to an IBM PC-compatible computer system. It is round and consists of 6 pins. In most cases, the green color PS/2 port is used by mice and the purple color PS2/ is used for the keyboard. 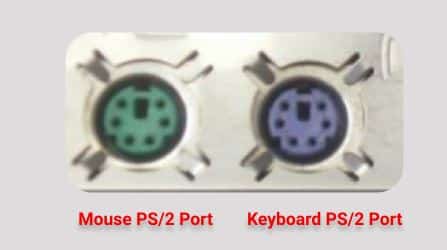 Some drawbacks of the PS/2 port system are :

USB stands for Universal Serial Bus. The USB port can transfer data at a much faster rate than serial and parallel port.

There are various types of USB port presence in today's laptop and desktop market. Some of them are :

Also Read: What is USB Upstream and Downstream in Monitor?

It is a common type of USB port present in general personal laptops and desktops. It comes with 4 pins connector and is available in various types and versions. They are USB 1.1, USB 2, USB 3.0 (now called USB 3.1 Gen 1), and USB 3.1 Gen 2. Although all those have 4 pins we can identify each of them by color.

USB Type B is not as common as Type A. The Type B connector is nearly square in shape. It is frequently used when connecting printer cables, scanner cables, USB hub cables, and external hard drive cables to computers. 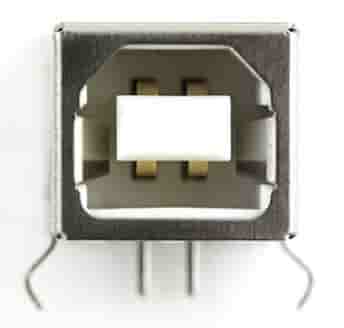 This is the future of USB port and is expected to replace both Type A and Type B port and many laptops and mobile companies are taking it as a standard USB port. The data transfer rate is 10 Gbps to 20 Gbps. It is much slimmer and smaller with 24 pins which makes it capable of handling high current and speeds. Every USB Type C port is a reversible plug which means they can be plugged upside down if you want. Some of its types are: USB 3.1 Gen 2 and USB 3.2 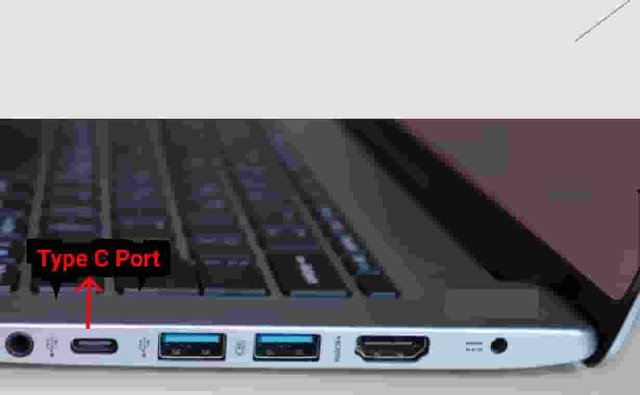 eSATA is an external Serial Advanced Technology Attachment port that can supply signal (but not power) to external storage devices such as hard disk drives. You can connect external drives to your computer or laptop if you have an external drive with an eSATA connector and your computer or laptop has an eSATA external port. It resembles the USB Type-A port in appearance. It has a maximum bandwidth of 6 Gbps, which is faster than USB Type 3.0's maximum bandwidth of 5 Gbps. In the past, laptops and PCs were used. It is about 2m in length and thicker than SATA.

Is eSATA and SATAe are same ?

Ans: No. eSATA stands for external SATA and SATAe stands for SATA Express. They have different connectors and ports.

eSATAp is power over eSATA. eSATAp is the combination of eSATA and USB ports. You can plug in a USB connector as well as eSATA connector in the eSATAp port.eSATAp can supply power at 5 V and 12 V.

IEEE 1394 port is another name for a Firewire port. There are two kinds of Firewire ports: Firewire 400 and Firewire 800. It, like USB, was a popular connector for connecting external devices to your computer, such as a hard drive, printer, scanner, camera, and so on. It has a transfer rate of up to 480 Mbps.

Before 2011 AD, most of the Apple systems used to have Firewire port, but from 2011 AD they started replacing Firewire Port with a much faster Thunderbolt Port. 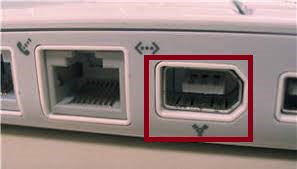 Thunderbolt is a hardware interface developed by Intel in a joint effort with an apple that allows you to connect external peripherals to your computer. It is a combination of two high-performance standards, DisplayPort and PCI Express(PCIe) into a single cable. 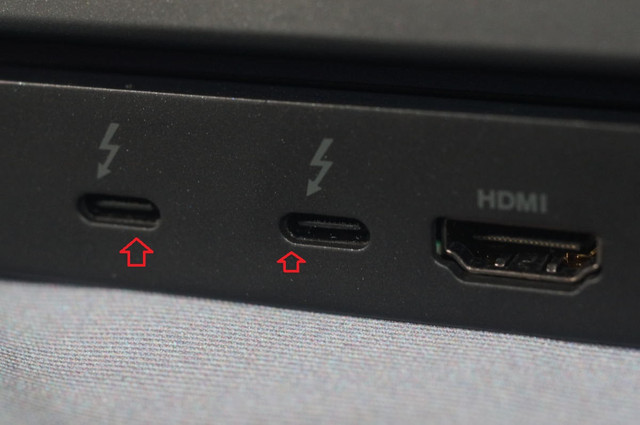 Ans: Just near to thunderbolt port there is a lightning bolt icon as shown above.

Up to now, we have 3 types of the thunderbolt:

Can I plug the USB into the Thunderbolt 3 port?

Ans: You can plug USB Type C devices into the Thunderbolt 3 port of your laptop or computer.

VGA stands for Video Graphics Array. It is much popular in older CRT monitors. It is analog in nature so its image quality degrades while converting from analog to digital and vice versa, also analog signal is more prone to noise.  It has 15 pins, with 3 rows of 5 pins. It does not have hot plugging features. 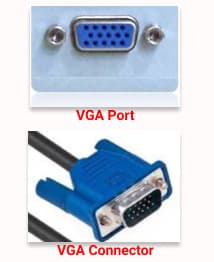 DVI Stands for Digital Visual Interface. It is the successor of the VGA port.it is designed to give high-quality audio-video to LCD monitors. It has hot plugging features and it has three types of cable. 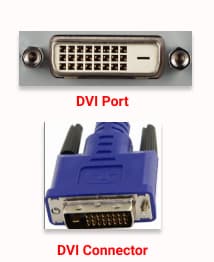 Both DVI D and DVI I comes in two formats:

HDMI stands for High Definition Multimedia Interface. It was developed in 2002 AD. Its look is similar to the USB port but it is comparatively larger in size and wire number.HDMI is used for sending and receiving high-definition audio-video signals through a single HDMI cable to the broad ranges of devices like digital TV, computer, projector, gaming console, mobile devices, digital camera, blu ray, Ultra HD player, cable box, etc.

Some HDMI versions are listed below:

Is Thunderbolt better than HDMI?

Ans: When connecting your TV or monitor to your laptop, then it's better to connect with HDMI as HDMI is the preferred connection type capable of transferring HD audio and video with a single cable. But thunderbolt can provide more bandwidth than HDMI so if you have thunderbolt you can use it.

Also Read : How to find and check windows 10 login history?

The display port is designed to replace both the VGA port and DVI which we will discuss later. click here.

S-Video is an alternative method for transferring video signals. It is a circular port with 4 pins or 7 pins. S-Video has the capability for displaying your video or presentations on a larger screen(TV, projector)  than the built-in display of your laptop. But note that S-Video does not transmit audio, but you can use your laptop speakers to listen to the sound from a video. 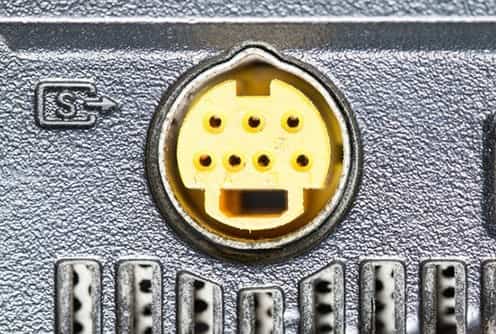 Ethernet Port is also called RJ-45 (Registered Jack -45) port or LAN port or just network port. It allows your computer and laptop to connect to a network using an RJ-45 cable connection. 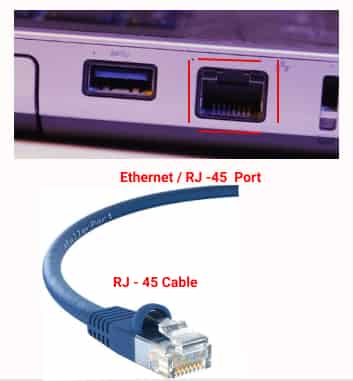 If your laptop or computer doesn't have a wifi adapter installed then you can use an ethernet port for connecting to the outside world for internet access.

Also, Read Parts of Motherboard and its Functions.

It is also called a memory card reader in the tech market. It is available on both PC and mobile. It is used for transferring data to and forth between computer and SD card. You just have to insert a memory card into the SD card port then it will display on-screen as a separate drive. 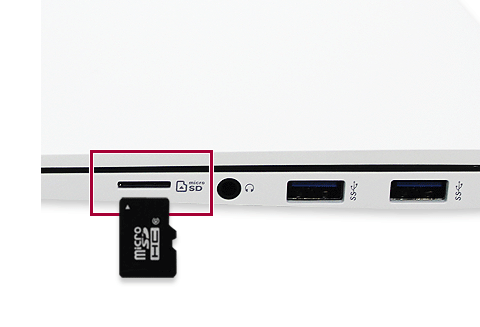 The standard size of the Headphone jack is 3.5mm.

But most of the desktop computer port comes with 3 to 6 port.

As laptops are portable devices so it has to be charged time and again. So, we use a power port for charging laptop batteries. Connect one end to the AC power socket and another end to the power supply unit. 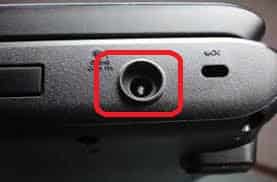