Nepal Flag : Interesting Fact about the Flag of Nepal

Fact about the flag of Nepal: Nepali Flag

Let's look at some of the facts and beliefs about the Nepalese Flag(Flag of Nepal).

1) Nepal is only the country having a triangular flag. Other countries have a quadrilateral (4 sided) flag. Nepalese people are proud of their distinctive national flags. 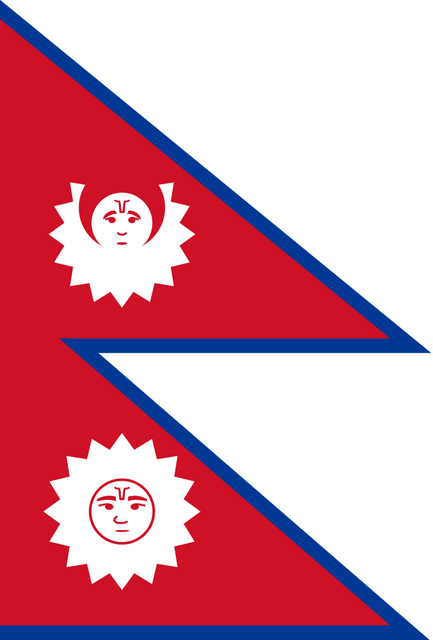 4)According to the Nepal Government, the two triangles in Nepal Flag represent the two major religions of Nepal - Hinduism, and Buddhism. 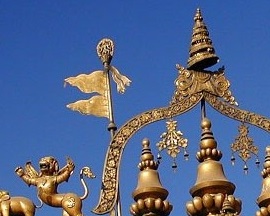 The Oldest Flag of Nepal is still present at Chhauni Museum near Swoyambhu. 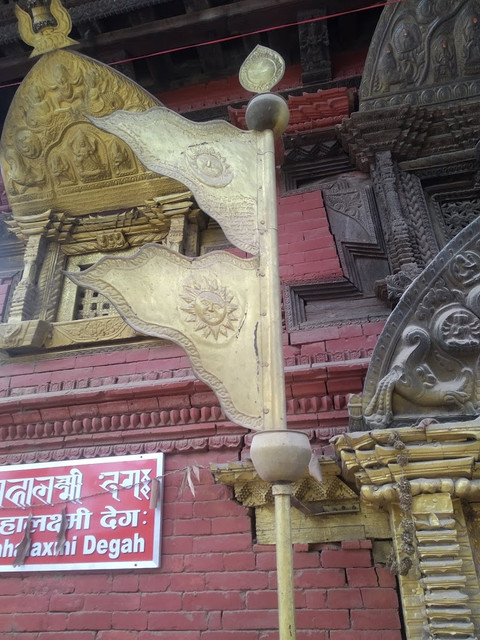 6)It is believed that these celestial bodies(sun and moon) in the flag indicates Nepal will exist as long as the sun(सूर्य) and Moon(चन्द्र) exist in the sky. This says  Mother Land is more essential than the kingdom of heaven.

It's also explained in Nepali songs ... some few words are:

7) Nepal Flag is considered the most mathematical flag. Mathematically it is hard to draw those sun and moon and triangle present in the flag. The flag of Nepal can be designed without the use of a ruler or scale. To construct the flag accurately as prescribed, good knowledge of geometry is required.
You can visit this youtube page to know more information. Visit here.

8)It is believed that Lord Vishnu had given their flag to Nepalese people, with the sun and moon as emblems on the flag. In a Hindu Purana, it is written that it was Lord Shiva who handed the flag to Lord Vishnu, and then Lord Vishnu to Lord Indra, for the purpose of battling demons.

10) No one knows who design the Nepalese Flag. Some say by Malla Kings, some say by RANA, and some say by Late King Prithvi Narayan Shah.

12)Some say Nepal has several hills and mountain areas. Keeping this in view the Nepalese flag ie. triangular shaped flag is designed.

13)The proportions of the flag are 4:3 plus the width of the blue border (which makes the upper pendant longer than the lower because of its sharper angle), according to the very accurate building data and information contained within the Nepalese Constitution.

What's makes difficult and complex in calculating aspect ratio is the use of a blue border in the flag, so for detail, we need to read what's said by the OEIS Foundation and Wikipedia online encyclopedia.

The irrational value of the sides-ratio of the circumscribing rectangle of the Nepali Flag is given as:

14)The triangular shape represents the historical shape of flags used on the Subcontinent by empires and kingdoms. Even today, the flags flown on India's temple masts and are mainly triangular in shape.

15) A triangular shape flag was also used in different states of India. Uses in Nagpur state, KurundwadState, etc but later was suppressed.

16)In Bharat Barsa aka during ancient times, all the flags were triangular in the Indian Subcontinent. Nepal has simply maintained its ancient tradition more than 2000 years ago, while every other one has an adopted rectangular or square western version.

17)On August 23, 2014 AD, Nepal once made the Guinness Book of World Records for making the largest human flag where more than 35,000 people are gathered together. This record was again broken by an attempt in India for their flag with 43,830 participants. 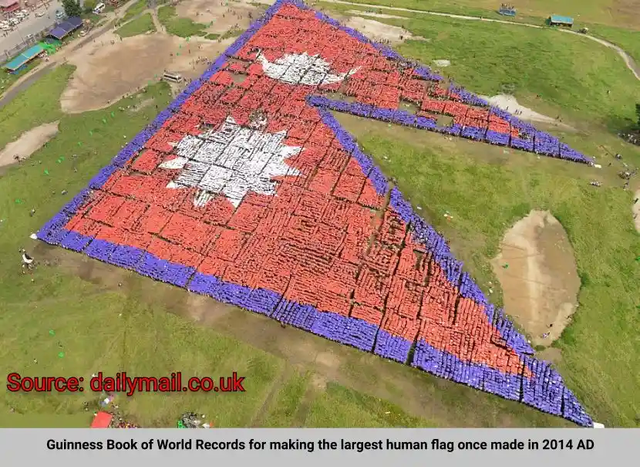 18) The bright sun will reflect work as it is such a hard-working country and everybody is busy during the day.

20)Religiously, the white color in the flag symbolizes the neutrality of the moon and the sun.

21)The flag's blue color also reflects the depth of the sky.

22)The blue color at the flag's border represents Nepal's boundaries and sovereignty. The red color of the flag gives the soul an inspiring quality of passion, anticipation, and strength.

23)The red color of the flag is also mentioned as the redness of the Buddhist monk's dress.

24) Also today, flags are mostly triangular at the door of the Indian and Nepal Temple.

25)The flag's red color symbolizes bravery. This demonstrates the courage of Nepalese by birth.

26)The sun and the moon's white color reflects the pureness and simplicity of Nepalese people.

Evolution of Flag of Nepal

The evolution of the Nepal flag from 1774 to current is shown below.

How many colors are there in the National Flag of Nepal?

Ans: Nepal has 3 colors in its national flag and they are :

How to draw the Flag of Nepal? (source: click here)

If you are curious about how to draw the flag of Nepal with paper. Then these steps and demonstrates will fulfill your dream. Here we are divided into 4 sections a) b) c) and d) as shown below.

(a) Method of making shape inside the boundary of Flag

b)Method of making the moon

c) Method of making the sun

d) Method of Making the Border

Some Other Important Questions you may have in your mind.

1) What is Moon on Nepal's Flag above the sun?
➤ The modern sense of the Moon over the Sun means that Compassion is greater than intelligence. And at the time the flag was created, Mr. Rimal, the modern flag designer, kept the Moon over the Sun because the Sun is a symbol of wisdom and the Moon is the symbol of love both in Hinduism and in Buddhism.
2. Where is the Nepalese national flag used?
➤ In the car of the prime minister, president, government offices, courts, army and police offices, embassy, ministry and constitutional bodies, school, colleges, national international sports, and events, etc.

Wants to know more about Nepal, then visits the below link.