History of Earthquake in Nepal

History of Earthquake in Nepal

Before deep-diving into the History of Earthquake in Nepal, let us know something about Earthquake. Earthquake is an instance of shaking of the earth's surface. The shaking is caused by movements in Earth’s outermost layer(lithosphere). There are four different types of earthquakes:

Actually, what happens is two nearest tectonic plates (like Eurasia and Indian plate in context of Nepal) slides, bumps or hit every time which raises friction and most of the times this friction will be small and we do not feel an earthquake, but sometimes this friction will be greater than critical value and due to that friction, energy gets released and this energy creates seismic waves that travel through the earth's crust and cause the shaking and we feel it which is an earthquake.

Actually, there are three types of Tectonic earthquakes. 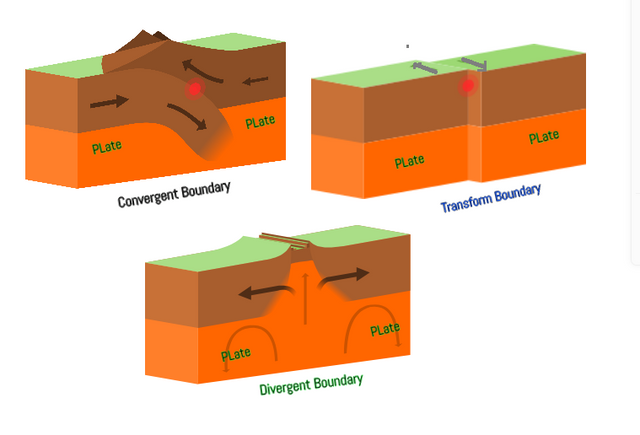 1)Convergent Plate Boundary: It occurs when two tectonic plates move toward each other. Massive Himalaya is created in this way.

2)Divergent Plate Boundary: It occurs when two tectonic plates move away from each other. This type creates mid-oceanic ridges or rift valleys. Iceland is an example of a country undergoing a continental divergent boundary.

3)Transform Fault/Boundaries: Here two tectonic plates slip by each other.

The junction of the India and Eurasia tectonic plates is the cause of earthquakes in the Himalayan region during April 2015.

You can get updates of an earthquake in Nepal from sites: http://seismonepal.gov.np/home

Microseismic monitoring(It is a very fast and efficient tool to understand the seismotectonics of the region.) in Nepal started in November 1978 by the Department of Mines and Geology (DMG), Ministry of Industry, government of the federal democratic republic of Nepal in collaboration with Laboratoire de Geophysique Appliquee, Paris University, France with the installation of first short period vertical seismic station Phulchoki (PKI) hilltop in the south of Kathmandu. The numbers of stations were augmented gradually to create the National Network consisting of 21 short-period seismic stations in 1998 and 7 accelerometer stations in 2012. The network is operated in collaboration with the Department of Analysis & Surveillance of Environment (DASE), France. The 21 short-period seismic stations and 7 accelerometer stations occupy the Lesser Himalaya and Sub Himalayan terrain of Nepal Himalaya uniformly.
The recording is carried out at two centers Birendranagar Regional Seismological Centre (RSC), Surkhet and National Seismological Centre (NSC), Lainchour, Kathmandu. RSC records 9 stations of mid-western and far-western Nepal while NSC records the remaining 12 stations from Pyuthan to Taplejung. The stations are operated in two sensitivity channels allowing a dynamic range of 110 dB. The signals are digitized centrally acquired using the JADE software of DASE. The location is made with ONYX software of DASE since April 2001. Before this ISIS software of DASE was used for acquisition & processing.

It is interesting to note that only earthquakes of magnitude 6.5 or above are known to cause damage in Nepal[2]

History of EarthQuake in Nepal

The first recorded earthquake in the history of Nepal took place on June 7, 1255 AD. 2200 were killed including Abahya Malla( Malla Dynasty king of Nepal) Target Region: Kathmandu. The magnitude of the earthquake is said to be around 7.8 on the Richter scale.

This earthquake occurred during the reign of King Jayadev Malla. This is the next recorded big earthquake after 1255 AD.Target Region: Sagarmatha. The magnitude of the earthquake is said to be 7.1 on the Richter scale where 100 were killed.

This is the next recorded big earthquake after 1260 AD. The magnitude of an earthquake is said to be 7.9 in Richter scale where 100 were killed. The epicenter of the earthquake was Mechi Zone.

This is the next recorded big earthquake after 1344AD was during the reign of King Shyam Singh. The earthquake of 1408 AD has been reported to destroy the Machhendra Nath temple of Patan. (Source) .Affected Area of the earthquake was near Nepal-Tibet Border, Bagmati zone. The magnitude of the earthquake is said to be 8.2 on the Richter scale where 2500 were killed.

The magnitude of an earthquake is said to be 8.7 where 6000 people were killed. Epicenter: Near Saldang, Karnali zone.

This earthquake occurred during the reign of King Sri Niwas Malla, 4500 people where killed. The magnitude of the earthquake was 8.0. The targetted region was the Northern Koshi zone.

Targetted Region: Northern Bagmati zone. The magnitude of the earthquake was 7.9  where 4000 were killed.

This occurred during the reign of Rajendra Bikram Shah. Epicenter: Kathmandu/Bihar. The magnitude of the earthquake was 8.0 Ms where 6500 were killed. 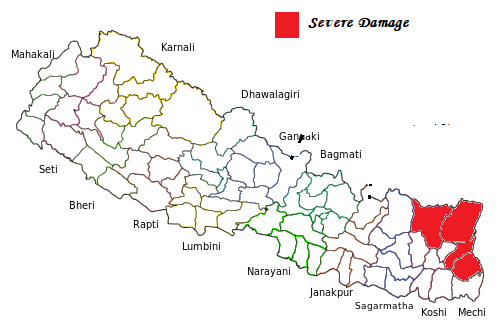 The epicenter of an earthquake is in the Nepal-India border in the east and mostly the Indian state of Sikkim was affected and has intense damage over there than in Nepal.

At that time 6 were deaths and 30 were injured reported by the Ministry of Home Affairs, Government of Nepal. Among 6, 4 were from eastern mountains and 2 were from Kathmandu valley.

It was the worst natural disaster to strike Nepal since the 1934 Nepal–Bihar earthquake. 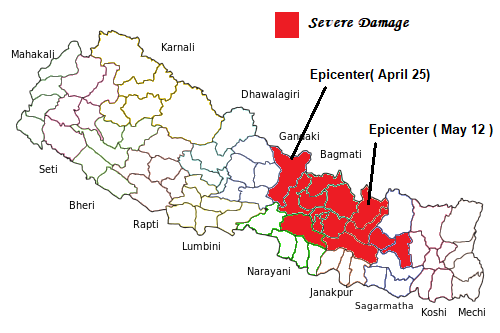 Epicenter: Less than 50 miles northwest of the central Nepal capital of Kathmandu.

Depth: 11 km / 6.8 miles. The earthquake's source was relatively shallow and contributed to its intensity and the resulting damage.

The 2015 Nepal earthquake, also known as the Gorkha earthquake, was a severe earthquake that shook the city of Kathmandu on April 25, 2015, in central Nepal. Hundreds of thousands of Nepalese spent the night outdoors after the powerful quake. After the earthquake in Nepal, priests are preparing to proceed with the cremation of earthquake victims at the Pashupati cremation center in Kathmandu.

The earthquake of 25 April 2015 shook Nepal, toppled multi-story buildings in the capital and triggered landslides and avalanches in the Himalayan mountains.
Many survivors of the 2015 earthquake in Nepal lost not only family members, but also themselves and their belongings.

In order to learn valuable lessons from this tragic event, an earthquake assessment team was sent from May 1 to May 7th, 2015 to Nepal by the Japan Society of Civil Engineers and Japan Geotechnical Society to Nepal. The team planned large geographical areas affected by the earthquake in order to cover and record the spatial conditions of the damaged earthquake regions.

31 out of a total of 75 districts of Nepal have been impacted by this devastation. The Government of Nepal classified 14 of them as the most affected, situated in the Central and Western mountains and hills, including the Kathmandu valley. These 14 districts are Bhaktapur, Dhading, Kavrepalanchowk, Gorkha, Kathmandu, Nuwakot, Lalitpur, Makawanpur, Ramechhap.

The total value of earthquake damage is estimated to be NPR 706 billion or US$ 7 billion. (source)

Approximately 100 international search & restoration and medical teams arrived in Nepal within 24 hours. The climbing season of Mt. Everest has been canceled. 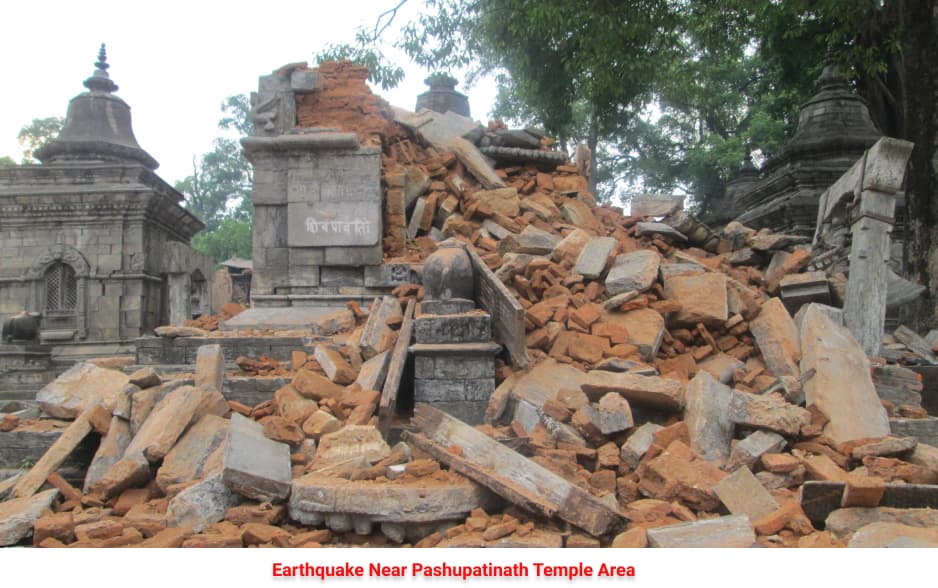 Visit: http://seismonepal.gov.np/earthquakes to know the current earthquake record all over Nepal.