Jo Cameron - Woman with no pain and anxiety Jo Cameron, 71-year-old scottish woman has rare gene mutation which leads her to feels no pain and anxiety. According to her ,She has no pain even after wrist surgery, even after her hip replacement and not even after giving birth to two child. she never panics and never feels afraid of not having pain. 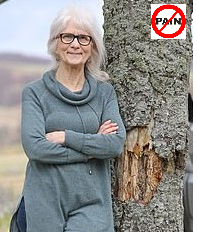 She says, one day she burn herself on the oven but she noticed only after she smelled out something burning flesh.She has never taken painkillers in life.She eats chillis with no fear.She recalled one incident where she had a great fall, broke her teeth and scared her face but felt no pain.She didn't realised she was different until she had a hip replacement at the age 65.

Researchers believe the mutation have been passed from Cameron's father ,who himself had little requirement for pain in her family member , gene specialist found that her son also carries same mutations.Though the same action were not observed in her daughter and mother.

When she has surgery on her hand ,doctors warned her she should expect pain afterwards but when she felt nothing ,her anaesthetist Dr. Devjit Srivastava(consultant anaesthetist from Raigmore Hospital in Inverness) sent her to pain geneticists at University College London and Oxford University. After many test , they found that no pain in her is due to gene mutations.They found two mutations in her. One mutation in a gene called FAAH (Fatty Acid Amide Hydrolase), which is present in every one (varies in amount) and this play a role in pain, memory and mood and second mutation scientist named out FAAH-OUT (unknown gene presents in Jo-Cameron) , which could be a "more effective way of creating a painkiller".Scientist called this unknown gene as volume control on the FAAH gene. (visits for more details)

James Cox say, "People with rare insensitivity to pain can be valuable to medical research as we learn how their genetic mutations impact how they experience pain".